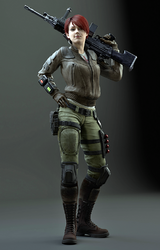 A boyish, highly trained recon specialist with an immense sense of pride. Marissa has a sharp and witty tongue, sometimes to a fault.

At some point prior to 1998, Marissa was an agent for the Secret Intelligence Service, the United Kingdom's secret service-equivalent. An injury sustained during a bomb-disposal operation led to her being taken out of active service and her resignation. However, due to her unique demolitions expertise and her highly regarded reconnaissance experience, the US Army sought her service within their Spec Ops division. She was successfully recruited into their elite "Echo Six" unit.