Mai-Ling, named Tao (タオ?) in Japan, is a fighting game character from the fantasy-themed 2D arcade game Red Earth where she is one of the four playable main characters.

Mai-Ling has short brown hair, and wears a leotard based suit of hùxīnjìng lamellar armor made for performance. She has a green beret with long twin striped tails. She dons thick green shoulder pads and poofy shoulder-length sleeves wrapping to her spiked elbow guard and thick wrist guards. According to some cutscenes and art, she is able to slide the elbow guards down her arm and use them as knuckle/claw weapons. She also has twin hip guards that functions much like a skirt, revealing her white leotard in high kicks. Her boots are more notably armored, made of a silvery finished metal, thick and with side spikes between her calf and shin. Her stance has her stand on one leg, with hand stances from probable kung-fu inspiration.

Mai-Ling is a fourteen year old skilled martial artist from Gora. Recently, she left her hometown and participated in a martial arts tournament in which she won first place. Overjoyed, she returned home to tell her family, but her joy turned to horror when she found her home and the entire town ablaze. As she stood in shock, the harpy Lavia descended from the sky and took credit for the destruction.

Mai-Ling then decided to search for the missing children from her town, and to discover what terrible evil had befallen the world.

As Mai-Ling levels up by fighting opponents in Red Earth, her title changes and grants her more abilities. Her titles are as follows:

Mai-Ling appeared in Pyron and Leo's endings in Capcom Fighting Evolution, in Tessa's defense moves in Pocket Fighter, and in the background of the Shanghai stage in Capcom vs. SNK 2: Mark of the Millennium 2001. She also appeared as a card in the SNK vs. Capcom: Card Fighters Clash series. 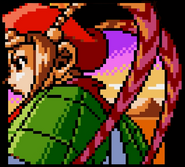