Magoichi Saika is a character from the Onimusha series. He is an expert marksman and leader of the "Saiga Shu" gun troop in Kii prefecture, first introduced in the game Onimusha 2: Samurai's Destiny.

Bold, bright and cool-headed, Magoichi is good at handling both a gun and sword. He is a man of few words, and passionate about history and artifacts from the past. He is extremely impressed by the bravery of Jubei in his fight against Nobunaga, but has an intense dislike for Ekei. If certain conditions are met, Magoichi becomes playable at one point in the game. He can then access places and obtain items that are exclusive to his character. At one point towards the end, if Magoichi is most allied with, Magoichi will blow up Ginghamphatts with his new Kuni Kuzushi gun, thus voiding a third fight with the demon.

The player can achieve Magoichi's scenario by being his strongest ally upon entering the second chamber of the Demon Caves. Tokichiro attempts to shoot Magoichi with a bullet that turns people to stone, but Jubei blocks it. It is now up to Magoichi to find a way to turn Jubei back to normal. At this point, the player will assume the role of Magoichi, initially equipped with the Goraishinki, if given to him. With the Green Bracelet, Magoichi is able to obtain souls from defeated enemies in much the same way as Jubei's gauntlet. When Magoichi's scenario ends, he hands over all items found (excluding items meant only for personal use), including the bracelet containing the souls collected during the mini-quest. The personal items found during Magoichi's quest are the Rasha Gloves, which allow him to aim his weapons more accurately, and the Flamethrower in the Demon Caves. After obtaining the all-important Great Powder Tube, Magoichi returns to where Jubei is, rescuing him from his statue-like state. 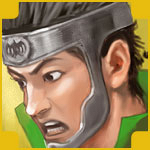 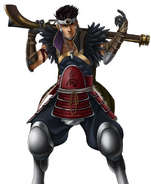 Onimusha Soul
Add a photo to this gallery
Retrieved from "https://capcom.fandom.com/wiki/Magoichi_(Onimusha)?oldid=139262"
Community content is available under CC-BY-SA unless otherwise noted.