Mack The Knife, known as Jennety (ジェネティー, Jenetii) in Japan, is a character from the beat 'em up game Captain Commando. Mack is a mummy-like alien from outer space and a member of the Commando Team. He always seems cool, calm and collected.

His English name comes from the song of the same name, made popular in the late-1950's by Bobby Darin, and his Japanese name is derived from the word "genetic". He is also known as the "Mummy Commando" in the character select screen.

As weapons, he uses sub-sonic knives which melt any enemy he hits. His Special Move is the "Spinning Attack" (スピニングアタック), a sure-killing technique. Spinning round like a top, his bandages lash his enemies like whips. His Dash Attacks are "Double Trouble" (クロスアタック, "Cross Attack" in Japan) and "Sky Assault" (ジャンピングアタック, "Jumping Attack" in Japan). Double Trouble sticks his enemy with both knives and Sky Assault is an airborne version of Double Trouble. Mack can also grab his enemy and either stick them or throw them.

Other things he has are the "Captain Cap", the "Genetic Bandage", the "Genetic Knife" (simply "Knife" in Japan, said to be "made in genetic") and the "Gravity Controllers." His Captain Cap is his hat, which is a souvenir from his first meeting with Captain Commando. His Genetic Bandage is life-sustaining equipment for his survival on Earth. His Genetic Knife melts all matter, and the Gravity Controllers are his shoes that adjust the gravitational pull to where it's best for battles. 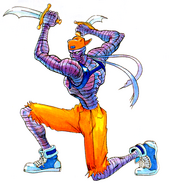 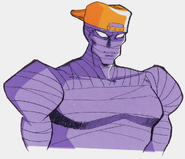 Artwork by Falcoon
Add a photo to this gallery
Retrieved from "https://capcom.fandom.com/wiki/Mack_The_Knife?oldid=136723"
Community content is available under CC-BY-SA unless otherwise noted.