The MA-124 Hunter Gamma is a creature from the Resident Evil series. It is first encountered by the player in Resident Evil 3: Nemesis.

An amphibian version of the Hunter, nicknamed Frogger/Blocker due to its frog-like appearance. The Gamma model has no eyes or teeth. Instead, it has a large mouth that allows it to swallow its prey whole, and small claws on their webbed hands.

They were secretly being harvested in tubes within a small lab in the Raccoon General Hospital, and make their home in the watery areas of the hospital's basement.

Due to their amphibious nature, they are exceedingly difficult to transport and maintain. Therefore, the only existing Gamma models were experimental ones, as they were not mass-produced. Additionally, another factor that adds to their weaknesses is the fact that they cannot resist dry air or heat, and thus must be kept in strict watery environments only to ensure its survival.

Another version of the Gamma appears in the Outbreak series, where it lacks claws and has a slightly more human appearance, walking on two legs. The research on the model was not continued, due to its multiple weaknesses and lack of effective fighting prowess. This version is shown to have a degree of physical strength, as it can deadlift a grown adult of 200+ pounds right into it's mouth. 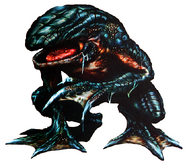