The first successful Hunter model, the Alpha model was developed by Albert Wesker and William Birkin within the Arklay Research Facility in the Arklay Mountains. During the T-Virus outbreak in Raccoon Forest, the Hunters were released by the resurrected James Marcus to eliminate Rebecca Chambers and Billy Coen when they were in the facility. There were also a good deal of these Hunters stored in the Arklay Research Facility, where they were released by Wesker in an attempt to eliminate the surviving members of S.T.A.R.S.. There were also some Sweeper variants of this type of Hunter.

In the Resident Evil remake, a file found in the mansion describes a new creature that looks like "a skinned gorilla" that rips apart animals fed to it before it eats. With the Hunter Alpha having long arms and large shoulders similar to a gorilla's and no fur, it may be the Hunters that this file is referring to.

In Resident Evil, they are probably the most troublesome and frustrating enemies in the game. They don't appear until the player returns to the Mansion after exiting the Guardhouse. Once inside the Mansion, the Hunters essentially replace all the zombies that the player had previously killed. These foes are very quick, and their attacks are often deadly. The player must be on guard for its jumping slash attack, which can kill in one hit. The best thing to do against Hunters is to nail them quickly with the most powerful weapon.

The Enhanced Hunter featured in these games was able to follow an electronic device called a Spotter to its prey. Chris Redfield encountered this type of Hunter on Rockfort Island.

The Sweepers, also encountered in these games, were a variation on the enhanced ones. They were dark red in color and poisonous, making them even more dangerous. 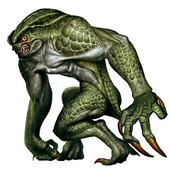 A Sweeper from Resident Evil: The Darkside Chronicles

Promo for the 10th Anniversary
Add a photo to this gallery
Retrieved from "https://capcom.fandom.com/wiki/MA-121_Hunter_Alpha?oldid=132546"
Community content is available under CC-BY-SA unless otherwise noted.