Lumine (ルミネ Rumine) is a character from the Mega Man X series of action platformer games. He is a new generation Reploid and director of the "Jakob Project" who appears in Mega Man X8 as a supporting character at first but later as the villain and final boss.

Lumine appears as a young adolescent Reploid with long lavender hair, with a style similar to the one of Tron Bonne, most of it styled into a half-moon motif with a fringe covering one half of his face, which features gold eyes, but no eyebrows. His armor is of a slim design, having a white and dark purple color scheme with green hexagonal accents and a large blue jewel on his chest. Lumine also lacks a helmet with the intention of giving him a more human appearance and has a slight feminine figure.

His final form is based on an angel in direct contrast to Sigma's demonic final appearance. Lumine's armor changes and he gains a helmet similar to Zero's, his skin turns pale white, and his hands become claws. He also gains a unique set of wings, with four large compartments, connected to him by thin appendages. Lumine's overall design and abilities, along with his voice, invoke feelings of him being a transcendent or divine being, not limited to any specific form or gender.

Lumine's personality isn't explored deeply, however in his short appearances he has shown instances of multiple personalities, though it maybe more accurate to say that they change drastically between each other. First, Lumine can be rather calm and somewhat talkative (mainly while he's explaining something). In this sense he also seems incredibly intelligent, as he is able to tell what the characters are thinking as well as provide a highly detailed explanation.

However, despite his "positive qualities" he has shown some traits of madness. This being when he reveals his plans to the Maverick Hunters and his eyes shine red (which is considered a symbol of evil or madness), his tone also changes drastically to something more wicked, followed by maniacal laughter. After he is defeated his body is shown in a kneeling position, with his face resembling insanity. Further evidence of how twisted his mind could be is when he stands before Sigma's remains, and starts to crush them with his foot, showing that he may be sadistic, and that he cares nothing about the ones he use, making him also cruel.

At the end of the intro stage, Vile "kidnaps" Lumine and takes him away. After vanquishing Sigma in Normal or Hard mode, Lumine reveals that Sigma had fulfilled his purpose, and that it was in fact he who had manipulated the Maverick leader and not the other way around. Upon revealing himself as the leader of the new "turn-Maverick-at-will" generation of Reploids, as well as the true mastermind behind the events of Paradise Lost, Lumine will try his hand at defeating the Hunters.

After being beaten the first time, Lumine will explain to X, Zero, and Axl that the copy chips included in the New Generation were composed of hundreds of old model Reploids, including Sigma. He also mentioned that Axl, as a prototype, is incapable of becoming like Sigma who did not turn insane from the virus, but rather rebelled of his free will, as has the new-generation Reploids. He also promptly taunted X, asking if he could stop them, who have evolved far enough, even though he is a tool of humanity, before declaring that, as a tool of humanity and having run his course, he will have him exterminated. Axl, however, managed to shoot at Lumine, and declare him an enemy, although Lumine claims that time and existence has "irrevocably changed," declaring that they are no longer needed in the new world before engaging them in combat.

Lumine expresses disbelief at his defeat, but then claims that it's already too late to stop what has begun, and also implies that it will take far more to stop the upcoming event than simply eliminating every single one of the New Generation Reploids before drawing his last breath. Afterwards, Lumine's "corpse" flings out a tentacle at Axl (who approached it to investigate his remains), managing to implant itself with a pinkish object in Axl's head crystal before Zero destroyed the tentacle, and X finished it off by destroying Lumine's remains. 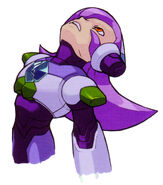 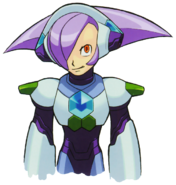