Capcom Database
Register
Don't have an account?
Sign In
Advertisement
in: Article stubs, Articles with incomplete sections, Games,
and 8 more

Lost Planet 3 is a third-person shooter game developed by Spark Unlimited and published by Capcom for the PlayStation 3, Microsoft Windows and Xbox 360. It was released August 2013 worldwide.

Instead of the militarized VS bipedal mechs of the previous two games in the series, the game features mechs called Utility Rigs that are the predecessors of VS mechs. Unlike VS mechs, URs aren't militarized with weapons and instead are equipped with drill arms and claw arms for mining.

Lost Planet 3 takes place long before the events of Lost Planet: Extreme Condition, and hence the planet of E.D.N. III is still in an ice-age like environment. The game follows the story of Jim Peyton, a colonist who is working for NEVEC and helping mine the planet and sending minerals back to Earth, where his family awaits him.

Lost Planet 3 received "mixed" reviews on all platforms according to the review aggregation website Metacritic. 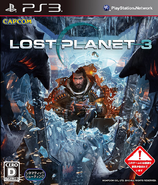