Many gameplay features from the original Lost Planet returned. Recurring elements included major boss battles, extreme terrain, and the ability to pilot mechanized armor suits, known as Vital Suits (VSs). On July 24, 2009, at Comic-Con 2009, producer Jun Takeuchi held a Q&A session for fans. Takeuchi revealed that there would be a lot more co-op based VSs. Players would be able to ride on the sides of some VSs. These VSs can be controlled by one player, while two others hang on to the sides and shoot. Takeuchi also revealed that there would be flying VSs which feature unlimited flying time.

Also unlike Lost Planet, Lost Planet 2 did not constantly drain players of Thermal-Energy. This was due to the warmer climate, which could sustain T-ENG presence longer than a cold climate, which drained thermal energy bit by bit. Instead, energy can only be drained when the player pilots a VS and/or uses a weapon that requires energy. If one player loses all their energy, another can give them some of their energy, using a new weapon, to keep players alive.

Kenji Orguro and Jun Takeuchi announced that the game would reward players with experience points. Players earned more points for playing in a unique manner and completing extra objectives in missions. A newer announcement stated that the game would feature split-screen for offline co-op campaign.

Unlike its predecessor, Lost Planet 2 allows players to create and customize their own characters. Players were able to customize their character's head, body, back and legs, and could unlock more clothing and body types after leveling up. The game also let players edit gestures, weapon models, and color palettes used. However, weapons used in multiplayer will have to be unlocked through leveling up. There are also some downloadable costumes or skins such as the Monster Hunter Armor, Helghast Solider and Helghast Scout (Killzone 2), Albert Wesker in his Battle Suit from Resident Evil 5 and Frank West from the Dead Rising series.

Lost Planet 2 received mediocre reviews. For example, IGN gave the game a 6/10 stating that "If you've burned through other multiplayer or co-op options, then there might be something for you in Lost Planet 2. The single-player campaign is lengthy at around 14 hours with full co-op support and the multiplayer has plenty of maps and modes. Just do yourself a favor: buy some insurance for the controller you'll invariably throw across the room at one of Lost Planet 2's seemingly endless design and interface issues." 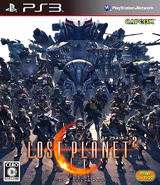 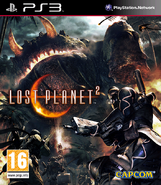 Retrieved from "https://capcom.fandom.com/wiki/Lost_Planet_2?oldid=129190"
Community content is available under CC-BY-SA unless otherwise noted.