Lost Planet: Extreme Condition is a third-person shooter video game created by Capcom for Microsoft's Xbox 360 and PC. A PlayStation 3 version was developed and released on February 29th 2008. The game was produced by Keiji Inafune, the creator of the Mega Man and Onimusha series. It is the first game in the Lost Planet series and was followed by a sequel two years later.

The game utilizes both Vital Suit (also known as VS, which is like a mecha or robotic armor) piloting and on-foot exploration and features Korean actor Lee Byung-Hun as the model for the main character, Wayne. Lost Planet was released on January 12, 2007, in North America and PAL regions. Lost Planet: Trag Zero, a prequel which focuses on the character of Gale, Wayne's father, was also released on cell phones.

Most of the game revolves around combat. Wayne can use a variety of weapons, like machine guns, shotguns, and rocket launchers. In addition to hand-held weapons, Wayne can pilot an assortment of robot suits (mechs), called Vital Suits (VSs). Weaponry is used to combat the planet's native species, the Akrid. The Akrid are a hostile, insectoid species, which come in many forms. They can range from smaller than a person to several times larger than a mech. Wayne also fights groups of enemy human soldiers, called Snow Pirates. The Snow Pirates use the same kinds of handheld weapons and VSs that Wayne does.

There are multiple Vital Suits available for use, the GTT-01, the GTF-11, the GTB-22, the GTF-13M, the PTX-40A, the GAB-25M, the GAN-34, the PTX-140, and the PTX-40A/L-P-9999 (In approximate order). Also, when on foot, Wayne has the ability to remove heavy weaponry from these vital suits for upgraded firepower. For battlefield mobility, some of these vital suits can "Transform" into a faster, more agile form. For instance, one light-weight vital suit can transform into a Snowmobile-type transport with a chain-gun attached to it. As for weapons, there are some of the typical science fiction weapons such as sub-light speed lasers and slow-moving plasma bolt guns. The main weapon in the game is the previously mentioned machine gun, which somewhat resembles a FAMAS. It is quite effective at both medium and short ranges when against humans and small to medium-sized akrid, but is of limited use against boss akrid and VSs. Wayne can carry a maximum of two weapons at once. He, and multiplayer characters, are capable of using a grappling-hook type tool to gain vantage points.

In both the single-player and multiplayer game modes, there is a "T-Eng" (Thermal Energy) meter below the character's health. This counter goes down continually in the cold, and can be refilled by collecting pools of glowing orange "heat" that drop from dead enemies or other heat sources, such as an explosive barrel. It can also be replenished by activating data posts. The T-Eng is used to refill Wayne's health in the single-player mode, and is used to power energy weapons such as plasma rifles and removable mech energy weapons. If the T-Eng drops to zero, Wayne's health will begin to drop. 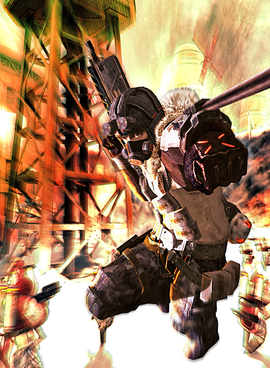 The game has multiplayer support on Xbox Live with up to 16 players online in a single game. Players can compete through four game types; Fugitive, Elimination, Team Elimination, and Post Grab. Killing enemies, destroying VS, and hacking data posts will add to the players score while getting killed and committing suicide will take away points. The point total at the end of the game will be added to the player's overall score across all of their games. This score will be used to determine the player's level. The highest level is 99. Players can unlock new character models and patterns. There are eight (nine in SE version) multiplayer maps: Crimson River, Dark Town, Diplidation, Training Facility, Canyon 810, Lost Coast, Pirate Fortress, and Frozen Wasteland. There are also several downloadable maps that you can get off of the Marketplace. These include Battlegrounds, Island 902, Ice Drop, and Radar Field.

The weapon variety in Lost Planet becomes obvious when playing in multiplayer matches; the game features 5 varieties of grenade, 15 distinct weapons (7 of which are dual-function in that they can be carried by infantry or attached to a mech), and 6 mechs ranging from transforming tanks to jump-jet walkers. Weapon placements are randomized for each match, as are a player's grenades upon spawning. The five grenades include a regular hand grenade, a disk grenade which flies in 1 direction, a gum grenade which you can attach to people, and a plasma grenade which freezes your enemies.

On March 2, 2007, Capcom released the first gameplay patch for Lost Planet's multiplayer modes. The patch includes fixes that allow players to easier discern the nationality of their fellow players, to tell who is speaking during matchmaking and gameplay with an added "speaking" icon, as well as a connection speed/strength indicator. This speaking symbol is also added in the results screen at the end of the match. It also contains a number of bugfixes geared to prevent major glitches and exploits during online play. However a few people have not been able to enter a match, due to the host quitting the match. This problem has been linked to the NAT settings on a player's router, and can be rectified by making sure the NAT setting is OPEN. This can be determined through the network setting's diagnostics test from the 360 dashboard.

Capcom has released three sets of map packs for 400 Microsoft Points each. The first set included Radar Field and Island 902 and it was released on March 9, 2007. The second map pack was released on April 6, 2007 and included Hive Complex and Trial Point.

The third map pack featured three new maps on June 21, 2007 and included "Ice Drop", based on a glacier, "Ruins", based in a jungle, and "Lost Technology", described as "a throw-back to the good ol’ days of pixelated 8-bit gaming."

Additionally, Battleground, a map which was only available in the limited edition version of the game, was released for free download on June 7.

Hive Complex, Trial Point, Radar Field and Island 902 became available for free on Xbox Live Marketplace on July 16th along with extra content (including Frank West and the Mega Man X armor for him) and a new patch addressing connectivity.

The game's plot focuses on the amnesiac character Wayne Holden, his father, Gale Holden, and the past and future of the planet E.D.N. III. After a particularly vicious battle against a large Akrid creature known only as "Green Eye", Gale is killed, and Wayne is lost on the icy plains of E.D.N. III. The planet of E.D.N III is perpetually cold and snowy, originally inhabited by a species of aliens known as Akrid, who forced humanity to abandon E.D.N. III by strength of numbers and surprise. Initially, the Akrid deterred humans from colonization, but this changed when T-ENG was discovered. Thermal Energy, or T-ENG, is a powerful energy source, found only in Akrid bodies, made humankind determined to fight them, for which purpose they created the Vital Suit, or VS, technology, essentially mechs powered by T-ENG, carrying mounted weapons.

At the beginning of the game, Wayne is found on the snow plains by a small band of snow pirates, colonists left behind after the evacuation. References from Rick, the gang tech wiz-kid, suggests that the gang may have been larger at one point, but because of an attack by a rival gang, they are all that's left. The band consists of the cool-headed leader, Yuri Solotov, the wiz-kid Rick and his sister Luka. From the beginning, attention is put into a device implanted in Wayne's arm. Called the Harmonizer, this device feeds from Wayne's T-ENG reserve, and uses this energy to heal his wounds. The game starts off with the gang suiting up for the trek trough the mountains leading to the dome where Wayne last saw Green Eye. Along the journey they meet a woman named Basil, who has VS piloting skills and an arm-mounted device similar to Wayne’s Harmonizer. She's looking for a man named Solotov, who has apparently at this point vanished from their party. She also lets the crew know about a third mysterious faction called NEVEC.

Shortly afterwards they find Gale's VS, described by Rick as possibly the most advanced VS ever produced, and use it to defeat Green Eye. After the battle, NEVEC soldiers show up, along with a commanding officer, named Shane Bandero, who also has a harmonizer-like device though far more crude. His appearance triggers Wayne's memory, making him realize it was not Green Eye who killed Gale, but it was Bandero who made his soldiers kill him. After a short battle between Wayne and Bandero's VS's, Wayne is forced to retreat on Luka's scooter. They leave the dome to discover that their trailer has been destroyed and Rick captured by NEVEC troops. To compensate for their losses, and continue hitting NEVEC, they resort to guerilla-tactics, hitting NEVEC convoys and the like. After one of their raids, they discover Rick and Basil in a small shelter. Rick was actually attacked by NEVEC, but Basil rescued him and helped him though the year following his separation from Wayne and Luka. Now big events are afoot. By capturing a NEVEC soldier named Joe, and negotiating with him, they learn about NEVEC's Frontier Project, a terraforming operation to make E.D.N. III habitable by humans without the aid of T-ENG. At first, it seems harmless enough, though the truth is far from benign.

The Frontier Project will not only wipe out the entire Akrid race, but will also kill any human beings left on the surface of the planet. The Frontier Project was to use a nearby volcano's T-ENG to warm up the entire planet. During their attempt to halt the project, they meet Bandero again, along with his superior, and the commander of Nevec, Dennis Isenberg. They meet Bandero a final time, and killing him, they reclaiming Gale's VS. The heroes find Yuri, who has been tortured by NEVEC. Yuri then hands Wayne an attachment to his harmonizer, allowing him to realize the true power of Gale's VS. Their plan to take down the Orbital Elevator goes into action. Basil sacrifices herself to hold off NEVEC troops, while Joe plants high-strength charges to take out the Elevator itself. At this point, Wayne is seen installing his Harmonizer's attachment, which causes great transformations in his VS that, amongst other things, allow it to fly, and use dual energy swords. Wayne then flies up the elevator and battles Isenberg in the skies around the Elevator. Isenberg's VS is also top-of-the-line, second only to Gale's. After Isenberg is defeated by Wayne, Wayne's memories are erased again by the attachment.

Colonies also introduced four new single player modes: Score Attack (points are given for each kill dependent on kill type and weapon used, akin to the co-op mode in Halo 3), Time Trial Battle Mode (similar to the Arcade mode of Call of Duty 4: Modern Warfare), first person shooter mode, and Unlimited Mode (which must be unlocked). The game also included cross-platform play between Xbox Live and Games for Windows - Live users. The game was released on May 29, 2008 in Japan; the North American release was announced for May 27, 2008, while the European one was on June 6, 2008.

Gale Holden
Add a photo to this gallery 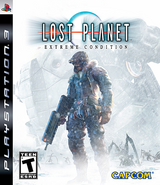 Colonies Edition Japan
Add a photo to this gallery 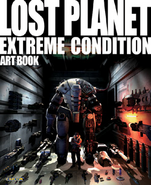 Retrieved from "https://capcom.fandom.com/wiki/Lost_Planet:_Extreme_Condition?oldid=129005"
Community content is available under CC-BY-SA unless otherwise noted.