Little Nemo: The Dream Master, known as Pajama Hero Nemo (パジャマヒーロー NEMO) in Japan, is a 1990 2D platformer game developed by Capcom for the NES. It is based on the animated film Little Nemo: Adventures in Slumberland, which itself is based on a 1905 comic strip by Winsor McCay titled Little Nemo in Slumberland (later In the Land of Wonderful Dreams).

Little Nemo is given an endless bag of candy by Princess Camille of Slumberland. He can use this candy two ways. The first use for the candy is to throw it at some certain creatures that are encountered in all areas of the game. After the creature chews three pieces of candy, it will fall asleep. When this happens, Little Nemo can either ride or "become" the creature. Some of these animals have an ability to defend themselves. The player discovers these abilities as they play the game.

The other use for candy is to momentarily stun creatures that cannot be ridden or imitated. This action will not dispatch the enemy characters. It will only slow them down. 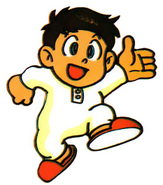 U.S. Box Art
Add a photo to this gallery

Retrieved from "https://capcom.fandom.com/wiki/Little_Nemo:_The_Dream_Master?oldid=140130"
Community content is available under CC-BY-SA unless otherwise noted.