Lieutenant Linn Kurosawa (リン・クロサワ, Rin Kurosawa) is a beat 'em up character and one of the four playable characters in Alien vs. Predator, being the single female hero.

Linn is a young woman of Asian descent, her light brown hair styled into a long arching ponytail, with several long bangs hanging over her forehead and has matching brown eyes.

She wears orange camo pants and a matching orange shirt under her breast plate, a single large shoulder plate, elbow guards and white fingerless gloves, a belt around her waist with a single buckle, a holster is strapped to her right leg, the sheathe of her katana is positioned behind her back, two shin guards, and metal sandals.

A cyborg who lead the 13th Colonial Marine Corps. She is a master of ancient martial arts which she combines with her super strength for lethal effect. Always equipped with a Japanese Katana, the blade represents her soul.

Linn's status as a cyborg has given her superhuman strength, agility, and durability, allowing her to go toe-to-toe with the incredibly dangerous Xenomorphs and their multiple variations, as well as keep up with the Predator warrior hunters in combat. Her preferred weapons of choice are her katana, and a large-caliber pistol.

Linn Kurosawa was featured in cameos in some other games. She appeared in the background of Ken's Street Fighter Alpha 2 stage and she also appears in the background of Ryu's Street Fighter III stage, bathing in a hot spring with Chun-Li. In Namco × Capcom, she is one of the Capcom characters referenced in Sylphie's Hissatsu attack, in which she dons her costume and performs her moves.

She has appeared as an expansion for the board game, AVP: The Hunt Begins alongside Dutch Schaeffer, in 2019. 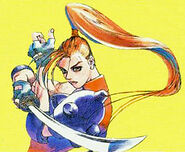 Linn Kurosawa with several other Capcom females. Only her foot is showing (bottom left corner.)