The Licker is a recurring enemy from the Resident Evil series of survival horror games. Lickers made their debut in Resident Evil 2, and later appeared in subsequent games such as Resident Evil Outbreak and Resident Evil: The Darkside Chronicles.

The creature got its name from its most distinguishing characteristic, its long sharp tongue which it uses to attack its prey. It also has its brain and musculature exposed, as well as sharp claws. They do not have eyes and have to rely on their acute sense of hearing to detect prey. Lickers are quadrupedal and can climb walls.

In addition to normal Lickers, there are also Enhanced Lickers located in Umbrella's Underground Research Facility in Raccoon City. These have greater resistance and attack power than the regular Lickers, are green in color and have larger claws. They are more agile, and tend to attack in groups. Enhanced Lickers also possess more developed senses that allow them to find their prey without first hearing movement.

A Licker β is a slightly modified variant of this B.O.W. was created by Tricell in response to the high black market demand for Lickers, usually bought by wealthy terrorists for their durability and intelligence. This enhanced version was encountered by Chris Redfield and Sheva Alomar in Resident Evil 5. 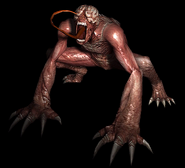 Promo for the 10th anniversary