Leo (レオ, Reo?) is a fighting game character from the fantasy-themed 2D arcade game Red Earth where he is one of the four playable main characters. He is the thirty-five year old half-lion king of Greedia. 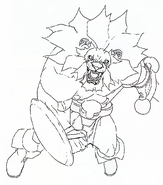