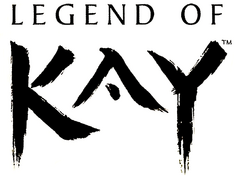 Legend of Kay is an action-adventure game developed by German developer Neon Studios, and published by Capcom in the US and by JoWooD Productions in Europe. Set in an Chinese-inspired fantasy settning with anthropomorphic animals, the plot focus on a young feline warrior who tries to save his once-peaceful island from the gorillas and rats who have conquered it. The game was released for the PlayStation 2 in 2005.

A Nintendo DS version developed by Firehazard Studio was released on 2010. There were also PlayStation 3 and Xbox 360 versions of the game released digitally in North America.

Legend of Kay Anniversary, a version of the game by Nordic Games featuring improved graphics and online leaderboards for players to compare scores, was released on PC, Mac, PlayStation 4, and Wii U on July 28, 2015. It was later ported by THQ Nordic to the Nintendo Switch on May 29, 2018.

For many generations, the mystical land of Yenching had been inhabited by many animals, mainly cats, hares, frogs, and pandas. Because of a religious code called the Way, these four races had prospered throughout the ages in their own separate towns. But as the years passed, the younger generations began to defect from the Way. Ultimately, with no protective code to guide the races, Yenching was invaded by the Gorillas and the Rats (known as the Din), led by Gorilla Minister Shun and Tak, the Rat Alchemist. Minister Shun now rules the majority of Yenching with an iron fist, and is said to reside in the volcanic mountain of Waa-Lo.

The story focuses around a figure named Kay who is a hotheaded young cat, and the Master's finest martial arts student. Like many of the people of the races, Kay does not believe in the Way, and likes to focus on physical skills and strength. In a sense he is a typical barefoot Kung-Fu student. This is what makes his friend, Su Ling, leave his town in disgust, hoping to find another town that would share her belief in resurrecting the Way. One day, in Kay's martial arts school, Shun's gorillas and the mayor of Kay's town declare that they must shut down the school because new 'Din schools' must soon be erected in the town. Kay is outraged, and even more so when his Master simply agrees to the new terms. And so, making up his mind, Kay sneaks into his Master's house at night (the Master is drunk and asleep) and steals the mystical blade the Master keeps. Kay then jumps out of the town walls, and makes his way into the wilderness.

Kay's exploits vary from traversing to the Haretree (the secret residence of all the hares of Yenching), befriending a dragon, traveling through dangerous swamps in order to reach Frog City, and riding on a dragon to get to the Forbidden City (the city of pandas, located on a plateau), all the while defeating hordes of rats, crocodiles, turtles, bears, ladybugs, and gorillas. There, in the Forbidden City, Kay finds his friend Su Ling, who is now a ringleader of the Avalanche, a group of pandas who are dedicated to the revival of the Way, and stopping Shun and the army of Din. After helping them out, the Avalanche begins its voyage to island of Waa-Lo, with Kay in tow. After an arduous voyage, Kay and the Avalanche begin to explore the caves of Waa-Lo, making their way to the center of the volcano. During the expedition, Kay finally catches up with Tak, the rat alchemist. After defeating him, Kay meets Shun in person. The two engage in a fierce duel, with Kay being the victor. Injured, Shun runs to the contraption he and Tak created. The fires of Waa-Lo power up the machine, and begin to fuse Shun and one of his bodyguards into a single, monstrous ape-like entity. With no choice left but to fight, Kay begins to do battle with the monster. As Kay strikes the final blow, Waa-Lo begins to erupt. Luckily, the Avalanche sends a rescue team, via a hot-air balloon.

As Kay, Su Ling, and the Avalanche (all back in the ship) stare across the horizon at the exploding volcano, the merchant (who the pandas have seemingly saved) tries to sell some souvenirs to Kay and Su Ling. With a grin, Kay pulls off the merchant's rice hat to reveal the Master himself. Kay jokes about finally having to master his abilities by outfoxing his master. Kay, Su Ling, and the Master all then begin to laugh, the ship returning for a free Yenching. 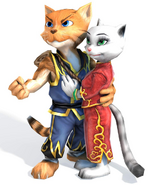 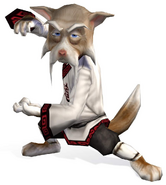 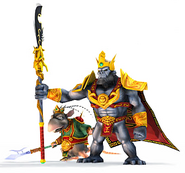 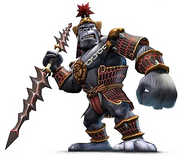 Bodyguard
Add a photo to this gallery

Retrieved from "https://capcom.fandom.com/wiki/Legend_of_Kay?oldid=137710"
Community content is available under CC-BY-SA unless otherwise noted.