Lee (李) is a non-playable character from the Street Fighter series who only appeared in the original Street Fighter game as one of the ten computer-controlled opponents.

Lee is a Chinese martial artist who participated in the first World Warrior tournament but ends up losing to Ryu.

Lee is now semi-retired and runs a real estate agency while training himself in the art of the Drunken Fist.[1]

He also makes an appearance as a card in SNK vs. Capcom: Card Fighters Clash.

Lee also makes an unnamed appearance in the UDON comic, Street Fighter Legends: Chun-Li in which he is shown challenging Fei Long to a fight at the unveiling of a Chinese art exhibition. Lee passionately questions Fei Long's right to present the exhibit, believing that he is merely an actor without real martial skill. The two fight right in the middle of the presentation, with Fei Long easily emerging the victor. 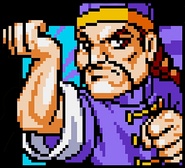 Lee in SNK vs. Capcom: Card Fighters Clash
Add a photo to this gallery

Retrieved from "https://capcom.fandom.com/wiki/Lee?oldid=129986"
Community content is available under CC-BY-SA unless otherwise noted.