Layer is a supporting character from the Mega Man X series. She is one of the three supporting navigators (the other two being Alia and Pallette) in Mega Man X8.

A relatively new member of the Maverick Hunters, Layer is trained as a Navigator specializing in Reploid and Mechaniloid development. Her high processing power allows her to quickly analyze scan data sent back by Hunters in the field and determine a target's strengths and weaknesses.

As a playable character, she takes after Zero unsurprisingly. Though her Layer Rapier looks thinner, it has the same reach and power as the Z-Saber. Layer can also use all of the same extra weapons and techniques Zero can.

Layer is cool and collected most of the time. Of the three female Navigators, Layer is the most like her male counterpart. She seems to get a little flustered when working with Zero though. 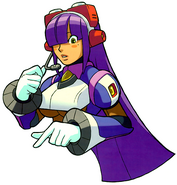