Last Duel: Inter Planet War 2012, also known as just Last Duel, is a 1988 vertical scrolling shooter arcade game released by Capcom which was available on various PCs and later came in a compilation of arcade games called the Capcom Classics Collection - Volume 2 for the PlayStation 2, Xbox and PlayStation Portable.

The player alternated per level between using car and space ship. The vehicle had two main attacks one of which varied depending on the form the vehicle took. In car mode, the vehicle could jump over pot holes and enemies while in ship mode, the vehicle would perform a barrel roll making it temporarily invincible and altogether dangerous.

The player could select Power-Ups that including a large, slow firing laser, a twin-shot, a wide shot and options that provided side attacks; Speed-Ups were only available in ship mode. Every driving section was timed and if the player was unable to reach the boss on time, they would lose a life. However, the moment the player encountered the boss, the timer would disappear.

Taking place in the year 2012 of an alternate galaxy, Last Duel involves the struggle between two planets Mu and Bacula. On planet Bacula, a strong warrior tribe known as the Galden rose to immense military power and literally conquered all of the societies on the planet. Unsatisfied with conquering just one planet, the Galden decided to conquer a neighboring terrestrial planet, Mu. Using advanced bioships, star fighters and motor vehicles, the Galden invaded Mu, destroying many of its cities and taking the planet's ruler Queen Sheeta hostage.

The remaining royal guards of Mu are deployed in space fighters that can transform into cars to rescue the queen and crush the Galden forces. 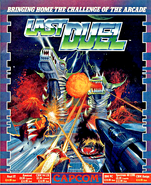