Las Plagas (Spanish for "The Plagues") are enemies from the Resident Evil series of survival horror games.

They are the agent of transformation in Resident Evil 4 and Resident Evil 5, unlike the various viruses from previous games. The humans affected are the Los Ganados and the Majini, although other life forms are affected by the parasites as well. Whereas Umbrella's viruses destroy a person's mind and body through mutations, Las Plagas are more subtle, invisibly attaching themselves to the victim's central nervous system and seizing control of their mind. Humans infested with Las Plagas, unlike zombies, retain full human appearance and speech capabilities, and seem relatively normal in both behavior and outward appearance. They also retain full human intelligence and are capable of acting collectively. 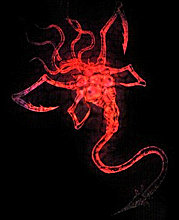 The Plagas were said to have been sealed deep under the castle by the first castellan. This first castellan had also taken away the rights of the early Los Illuminados. When they were unearthed, they seemed to have been fossilized. However, they had actually been in a deep dormant state that had kept them alive. The memo also says that the first Ganados were uncontrolled savages, and were created from tiny spores from the mining of these creatures. The old Plagas can be seen in rock in one of the chapters in the castle.

Ganados have been seen exhibiting such socially unacceptable behaviors as attacking outsiders, murdering each other, eating rotten and otherwise damaged food, and possibly committing acts of cannibalism. They also do not bother to keep their surroundings sanitary (e.g. by not cleaning their toilet facilities and beds, and leaving their food and murdered victims to rot in various places, such as in barns and in their dwellings). It is unclear if these behaviors are influenced by their circumstances and orders of the person in control of the Queen Plaga, or actual personality changes in the persons infected by the Las Plagas.

Las Plagas are extremely sensitive to light as they will only emerge from their respective host body at night, and even then only after the body sustains a lot of damage, or if its head is destroyed. The head of the host may either be destroyed completely and replaced by the parasite, or the parasite may emerge from the mouth or neck of the Ganado. However, due to their photosensitivity, Las Plagas can be destroyed with the use of a bright light source such as a flashbang grenade.

Several varieties of plaga may be seen during the course of the game. Some appear as the result of damage to certain parts of the host's body, such as the head, and may be a protrusion out of its host's body, or in whole as a detached entity. It is unclear if these are actually different varieties or mutations of plaga or if they represent various levels of maturity. The following is a list of non-unique Plagas or their parts as seen in the game.