Kyrie has auburn hair that is normally worn back with a gold and white beret. At the midpoint of the game, Kyrie wears her hair down, reaching several inches past her collarbone. Her bangs are worn short and parted, with most of it swooping over her right eye and several strains swooping over her left eye. She also has longer strains of hair from her bangs that frame her face that are about the length of her nose. She has hazel eyes, appearing brown at the center and fading into a moss green at the outer rim of her iris. Her skin is also fairly pale. She was noted as being "beautiful" by Nico in her journal entry about Kyrie.

Her attire in Devil May Cry 4 is a white dress worn traditionally during the Festival of the Blade by women part of the Order of the Sword. While not a knight, Kyrie's position in the festival is highly regarded as essential in order for the ceremony to commence, much like how hymns of worship open a religious sermon in church. The dress features a cream colored chest piece, framed in black fabric and ribbed. The cuffs of the dress are also in the same cream color. Black buttons with intricate rose engravings run from her collar bone done to her décolletage. The black framing is also found around her arms. Below the buttons is the sigil found commonly among members of the Order of the Sword and the worshipers of Sparda. Intricate gold patterns decorate her sleeves and along the seams of the dress. The pattern features the same sigil. To finish her attire, Kyrie wears knee high brown boots with gold trimming.

Kyrie's makeup is kept fairly simple. Her lips appear to be glossy with a faint pink hue. Her nails are long and delicate, having no visible color to them but are in the style of a French manicure.

During her song "Out of Darkness", Kyrie is wearing traditional jewelry. The headpiece is gold and intricate, with swirling carvings and cutouts found in it's design. The headpiece is akin to Sparda's horns in his demonic visage. She also wears golden dangling earrings with a blue gem dangling from each end. Over her arms, she wears a black lace shawl with intricate patterning, akin to the red shawl Eva wears in the same fashion.

At the beginning of Devil May Cry 4, Nero gifts Kyrie a golden necklace, featuring a seraphic-like, albeit with four wings instead of six, central piece with a red crystal held in place by two overlapping wings. Kyrie loses this necklace after Nero fights Agnus but is given the necklace back by Nero at the end of the game when he puts it on her.

Kyrie is typically the gentle angel-like person that calms the otherwise brash Nero. She values him deeply which became the reason why they became lovers.

Ever since Credo's death, she took it upon herself to stay by Nero's side, and left the Order of the Sword to be a part of Nero's branch of Devil May Cry. However, she doesn't join any of Nero's actions, preferring to stay home and look after the orphanage they operate.

Kyrie is implied to have an affinity with children.

Kyrie was born and raised in the city of Fortuna. She is the younger sister of Credo (the leader of the Order of the Sword's Holy Knights), and songstress for the Festival of the Sword. Kyrie is also the childhood friend and love interest of Nero. The three of them grew up as a family. Kyrie and Credo's parents were killed by demons. At some point, a number of demons appeared suddenly from the Mitis Forest (the forest that surrounds Fortuna) and attacked the city. During this incident, Kyrie was injured but would recover completely.

At the beginning of the game she is seen singing Out of Darkness at an Order of the Sword gathering, occasionally glancing at the empty pew where Nero is supposed to be. Nero appears just before the song ends, and he hands her a small gift as she comes to sit beside him while Sanctus explains the history of Sparda's rebellion against Mundus and his demon brethren.

As the people begin to pray, Dante crashes in and shoots Sanctus, causing widespread panic which briefly separates Nero from Kyrie. She drops the gift given to her in the confusion, and it is quickly trampled. As Dante approaches her brother Credo, Kyrie is knocked down and cowers in fear before Nero comes to her rescue. Credo orders Nero to hold off the assassin while he takes Kyrie to safety and fetches help. After Nero's skirmish with the Devil Hunter, Kyrie brings him his custom sword. While he prepares it for battle, she locates the contents of her package--a necklace--and puts it on. Afterwards, she goes with Credo as Nero investigates the demon uprising that Dante reportedly caused.

Kyrie later arrives to witness Nero with his demonic arm standing over a defeated Credo. Unaware that Nero defended himself against Credo who was infused with demonic power, Kyrie steps back in shock as Nero tries to explain what happened. Suddenly Agnus arrives and uses the confusion to kidnap Kyrie and flee.

Later, under the command of Sanctus, Kyrie is kidnapped by a Bianco Angelo, taken to the Savior and absorbed into its forehead. Nero comes to her rescue and promptly defeats Sanctus Diabolica. The madman threatens to kill her if he advances further, but Nero tosses the Yamato to the false prophet to distract him, then slams him into a wall with the Devil Bringer. With a swift cut from the Yamato, Nero frees Kyrie and impales Sanctus, killing him. Nero escapes the confines of the Savior with Kyrie safe and sound. Sanctus returns as the False Savior, but Nero quickly attends to the matter by pulverizing the twisted visage of the statue while Dante and Kyrie watch.

After settling matters with Dante, Nero approaches Kyrie cautiously, unsure of how she will react to his demonic powers. She responds by taking his Devil Bringer in her hands and expresses her desire to be with him, regardless of his nature. The two almost exchange a kiss, but some Scarecrows show up to interrupt the moment. Kyrie patiently waits for Nero as he attends to the matter, afterwards they are finally able to share their long-awaited kiss.

Devil May Cry 5: Before the Nightmare[edit | edit source]

In Devil May Cry 5 Kyrie only makes a vocal appearance throughout the story and is never seen in-game.

After the Order of the Sword incident, Kyrie started living with Nero. When a mysterious cloaked demon attacked him, Nero tells Kyrie go back inside. Once Nero's arm is removed, Kyrie runs to him and comforts him.

Later on, Nero calls Kyrie through a payphone and express his conflicted emotions at having found his blood related family (Dante and Vergil) and not having the strength to save Credo during the events at Fortuna. Kyrie convinces Nero to stick to his instincts and the young demon hunter resolves to save both his father and uncle from killing each other.

Kyrie made a cameo appearance in Onimusha Soul.

In Teppen, Kyrie is featured in two unlockable cards, one being of unit type and the other being of action type. Both are green cards. 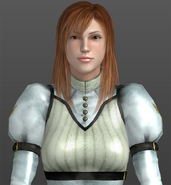 Screenshot in Devil May Cry 4.

The abduction of Kyrie in Devil May Cry 4.

DMC4 art of Kyrie and Lady.

Kyrie in Onimusha Soul.
Add a photo to this gallery
Retrieved from "https://capcom.fandom.com/wiki/Kyrie?oldid=142092"
Community content is available under CC-BY-SA unless otherwise noted.