Kyle Travers (voiced by Trent Kaniuga) is the protagonist of the 3D game Final Fight: Streetwise, a non-canonical installment in the Final Fight series of beat 'em up games. He is the younger brother of Cody Travers.

In his debut, Kyle has blond hair that's long enough to slick back. It usually appears slightly spiked in front. Both his hands are taped up as he is a fist-fighter. Kyle wears a set of dog tags. He also wears a white tanktop, although it often appears sweaty and stained with blood and dirt. He wears a pair of pale green cargo pants and dark-colored boots. Kyle occasionally wears a short-sleeve dark button-up shirt.

Kyle has a cool and serious personality. He is a street punk and accustomed to violence, but also has a burning sense of justice, as shown by his willingness to fight hard to rescue Vanessa and his brother. Kyle apparently also has a fondness for billiards.

Kyle is a 24-year old street fighter in Metro City's underground pit fighting circuit, and makes ends meet from brawl to brawl. His older brother, street legend Cody, serves as his cornerman, as he has given up fighting due to his pain-ridden arthritic knees. Cody sees that Kyle possesses vast potential as a fighter, enough to eventually be even better than him. However, Kyle lacks focus, occasionally struggling against competition that he could easily dominate due to his cocky and reckless attitude. This behavior only fuels Cody's desire to fight again and relive the thrills of his past.

Kyle is the star of the underground Metro City fight club, spending nights fighting various other fighters in order to earn enough quick cash to make ends meet. After the end of a fight one evening, Kyle and Cody decide to meet at the local bar to celebrate with some beers and a round of pool; however, Cody has some unspoken business that delays his arrival for an hour. After Kyle arrives at the bar, he plays a game with his girlfriend and bar owner Vanessa Sims (whose brother is a member of the police department), while waiting for Cody. Kyle later finds out that Cody is using a powerful strength-enhancing drug called "glow", which helps the arthritis in his knees. Kyle later discovers that glow is being made by a psychotic priest named Father Bella, who hopes to use the drug to bring about the apocalypse. When Kyle finds Bella on the roof of his church, Cody is with him, mutated by a concentrated dose of glow. It is later revealed that Bella is actually the younger brother of Belger, the antagonist of the original game, just before he and Kyle begin to fight.

During the battle, Cody regains his senses, and throws himself and Bella off the roof. In the courtyard of the church where both Bella and Cody have landed from the fall and survived, Bella reaches for his handgun but is stopped by Kyle. He says to Kyle "I am your savior," but Kyle picks up the gun, telling Bella, "You're nothing." Kyle then shoots Bella in the head. Afterward he finds Cody unconscious from the fall.

Some time later, Kyle and Cody wake up in the hospital, where they meet with Vanessa whose brother was killed during the final battles; she holds onto her late brother's badge in his memory. Cody's arthritis is now gone and he seems eager to resume fighting. Kyle notices Dr. Chang, the creator of "glow", leaving the police station on the local news and mentions he has a feeling this might not be over quite yet. 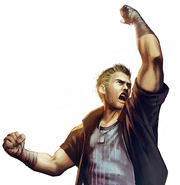 Final Fight: Streetwise
Add a photo to this gallery

Retrieved from "https://capcom.fandom.com/wiki/Kyle?oldid=138142"
Community content is available under CC-BY-SA unless otherwise noted.