Kotaro, based on Kotaro Fūma, is a character from the Onimusha series. He is a ninja working for the Hojo clan introduced in the game Onimusha 2: Samurai's Destiny.

Kotaro confounds his opponent with his agile movement and countless Ninjutsu. His childhood has been stained by the experience of being abandoned by his mother, which has caused him to distrust women, especially Oyu. Later in the game however, it is wiped away by her caring and kindness. He appears to be in his late teens to early twenties. If certain conditions are met, Kotaro becomes playable at one point in the game. He can then access places and obtain items that are exclusive to his character. If the player is most highly allied with Kotaro at the time of the final battle with Ginghamphatts within the Demon Base, Kotaro will be mortally wounded by the boss and dies just after the fight has ended. Whether or not this is Kotaro's canonical end is unknown, since his character does return in other games.

The player can achieve Kotaro's scenario by going into the woods in Fog Valley and under certain conditions in the second area, Kotaro will then appear to help Jubei get out of the forest. At this point, the player will assume the role of Kotaro, initially equipped with the Gabishi, if given to him. With the Blue Bracelet, Kotaro is able to obtain souls from defeated enemies in much the same way as Jubei's gauntlet. When Kotaro's scenario ends, he hands over all items found (excluding items meant only for personal use), including the bracelet containing the souls collected during the mini-quest. The personal items found during Kotaro's quest are the Stealth Costume in Fog Valley and the Roga-Kunai in the Red Phantom Realm, the strongest weapon in the game for him. After obtaining the all-important Red and Blue Stone Poles, Kotaro returns to where Jubei is, rescuing him from the wicked Jujudormah. 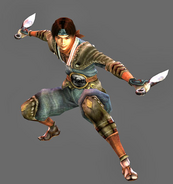 Onimusha Tactics
Add a photo to this gallery
Retrieved from "https://capcom.fandom.com/wiki/Kotaro_(Onimusha)?oldid=139261"
Community content is available under CC-BY-SA unless otherwise noted.