For the Onimusha character, see here.

Kotaro Fūma is a character from the Sengoku BASARA series of action stragety games. 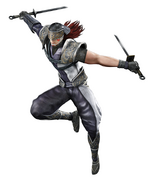 Sengoku BASARA 4 alternate costume
Add a photo to this gallery
Retrieved from "https://capcom.fandom.com/wiki/Kotar%C5%8D_F%C5%ABma?oldid=139253"
Community content is available under CC-BY-SA unless otherwise noted.