Kojūrō Katakura is a character from the Sengoku BASARA series of action games, introduced in Sengoku BASARA 2. He is known as the loyal retainer of Masamune Date or the "Dragon’s Right Eye". Like his lord, his element is lightning and his weapon of choice is a katana.

Kojūrō values honor and loyalty above everything else: he was ready to be executed for the "sin" of turning his sword against his master (albeit for a just cause). Kojūrō has been hinted to be stronger than his master various times (many characters' lines when encountering him reflect this), and possibly he knows this himself; but he has unwavering faith in Masamune, despite the latter's young age and recklessness. In the One-Eyed Dragon, he sees the future leader of Japan, and is determined to bring his master's ambition to fulfillment.

Kojūrō Kagetsuna, the man the Sengoku BASARA character is based on, served alongside the real historical Masamune Date. Their clan came to prominence in the Boshin War, when Shiroishi Castle was used as the headquarters of the Ouetsu Reppan Domei. Kojūrō Kagetsuna was known as one of the "Three Great Men of the Date Clan". After the war, Kuninori Katakura sold the castle and relocated to Hokkaidō. The castle was then given to the Nanbu clan of Morioka, before the domain system was finally ended in the early 1870s. The current head of the family, Shigenobu, is the chief priest of Aoba Shrine, in Sendai. 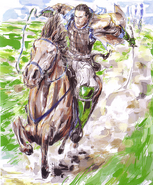 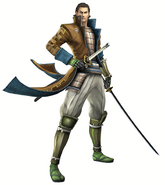 Sengoku BASARA 4 Sumeragi Alternate Costume
Add a photo to this gallery
Retrieved from "https://capcom.fandom.com/wiki/Kojūrō_Katakura?oldid=141330"
Community content is available under CC-BY-SA unless otherwise noted.