Kenshin Uesugi is a character from the Sengoku BASARA series. He first appeared in Devil Kings (known as "Frost" in the US version) as one of the playable main characters.

The leader of the Uesugi clan, Shingen's rival as well as a devout monk to Bishamonten. His effeminate looks cause him to be underestimated, and he has great speed. His accomplishments have earned him the nickname "God of War". Wields a katana and uses a style seemingly based on iaijutsu. His element is ice.

His relationship with the kunoichi Kasuga reflects a Takarazuka staple, the rapport between upper- and underclassman. While she more or less overtly displays her affection for him, he treats her kindly and lovingly, but always with cool detachment.

Kenshin was an NPC in Sengoku BASARA 3, but can be unlocked as an ally after being defeated by using Yukimura Sanada.

(From the Devil Kings strategy guide)

Uesugi Kenshin (杉謙信 February 18, 1530 – April 19, 1578) was born with the name Nagao Kagetora in the family of Uesugi’s vassal in the province of Echigo. He always respected and admired his main rival Takeda Shingen. They confronted each other in Kawanakajima five times. Between these confrontations Kagetora managed to visit the capital and famous religious and historical places which raised his reputation of a well educated person. After this tour he became a Buddhist monk and changed his name to Kenshin.

Uesugi was one of the most outstanding people of his time. Talented warrior, he was in his element at the battlefield, but at the same time he loved studying, wrote poetry and had a good sense of humor. Kenshin never got married and had no children. After death of Takeda and Houjou, Kenshin started thinking about expansion and opposed Oda Nobunaga. They fought only one battle, and Kenshin, who acquired experience in his rivalry with Takeda, had no difficulty in defeating Oda. Nobunaga had to retreat. The second battle never took place as Kenshin died in his castle at the age of 48 (the reason was unclear – stomach cancer, alcohol abuse or a strike from shinobi). When he learned about Kenshin’s death, Nobunaga said: "Now the empire is mine". 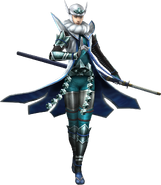 Sengoku BASARA 4
Add a photo to this gallery
Retrieved from "https://capcom.fandom.com/wiki/Kenshin_Uesugi?oldid=137861"
Community content is available under CC-BY-SA unless otherwise noted.