In the game, Kennyo is the Chief Abbot of the Ikko monastery, and is depicted as a greedy and stocky man. With his religion, he makes a profit for himself, not caring about others. Being vain as well as greedy, he enjoys flexing and showing off his well toned body. He is also in a religious rivalry with Xavi and Itsuki. His temple of Ishiyama Hongan-ji is in Settsu Province. Like Midas, Kennyo has a great love for gold. In his level in Sengoku BASARA 2, there are many ways to steal a lot of gold from him. During his boss fight, he will resort to bribing the player's allies to turn against the player's character when his health is reduced to about a half. He does this by tossing handfuls of gold coins at them.

As of Sengoku BASARA: Samurai Heroes, he is confirmed to be dead.

In the anime, he was killed by Mitsuhide Akechi alone, while Nobunaga and the Oda and Akechi armies were on standby.

Kennyo Hongan-ji, or Kennyo Kousa, was a son of Ikko-Ikki Sect leader and inherited his father’s post of the Ishiyama Hongan-ji (Hongan-ji temple) head along with Kaga Province. He became the 11th head of the Sect. Since the rise of Nobunaga, he joined the coalition of Takeda, Kenshin, Azai and Mori against Nobunaga, but his allies were defeated one by one. Hongan-ji temple was in the siege for ten years – the longest siege in Japanese history. In 1580, Kousa surrendered under pressure from Imperial Court. Reconstruction of the temple began 11 years later with the kind permission of Hideyoshi. 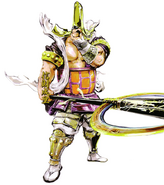 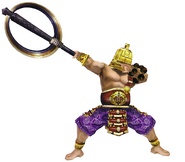 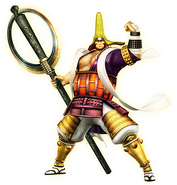 Sengoku BASARA: Battle Heroes
Add a photo to this gallery
Retrieved from "https://capcom.fandom.com/wiki/Kennyo_Honganji?oldid=137860"
Community content is available under CC-BY-SA unless otherwise noted.