A former chemist, Kenneth put his chemical knowledge to work as field scouting officer for the S.T.A.R.S. Team. Personally chosen by Albert Wesker to be a part of the Raccoon City team, Kenneth undoubtedly was a talented officer. Still, he harbored questions as to why his scientific knowledge was necessary for the mission.

On July 23, 1998, Bravo team was sent out into the Arklay Mountains within the Raccoon Forest, to investigate the cause of a number of animal attacks and cannibalistic homicides. Their helicopter would suffer a serious problem with its engine, due to an apparent sabotage. The chopper went down over the trees, but Raccoon Police Department pilot Kevin Dooley and his S.T.A.R.S. co-pilot Edward Dewey had just enough control to land soft enough to avoid injuries.

After a brief search of the area, an upturned Marine MP truck and its missing prisoner prompted a halt to the initial investigation, to be replaced by a manhunt. Bravo team would eventually find their way into a deserted mansion, where they would lose contact with one another over the next day: Forest Speyer would be killed by crows in the top floor balcony, while Dewey succumbed to his wounds after being mauled by a pack of Cerberus dogs. Rebecca Chambers, too, would disappear for the night, having discovered a deserted train and the prisoner on it. Enrico Marini would disappear from the mansion altogether, while Richard Aiken would be attacked by a gigantic venomous snake.

Only moments after Alpha Team's arrival at the mansion, the player is sent to investigate the sound of a gunshot, Kenneth was attacked by a zombie in the Dining Room. He escaped into a linking hallway, firing as he went, but his shots failed to strike it down. Overwhelming Kenneth, leading the player to discover Kenneth being devoured by a zombie. When S.T.A.R.S. members Jill Valentine and Chris Redfield arrived in the room seconds later, he lay dying in front of them, passing shortly before Chris and Jill put down his assailant.

Kenneth was one of the nine playable characters in Resident Evil: Deadly Silence. 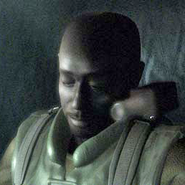 Resident Evil: Deadly Silence
Add a photo to this gallery

Retrieved from "https://capcom.fandom.com/wiki/Kenneth_J._Sullivan?oldid=134366"
Community content is available under CC-BY-SA unless otherwise noted.