Kenji, named Mukuro (ムクロ?) in Japan, is a fighting game character from the fantasy-themed 2D arcade game Red Earth where he is one of the four playable main characters. He is a ninja and is said to have been born in 1971.

When the blackships of unknown invaders appeared in the skies of Zipang and began attacking the country, the shogun ordered his best ninja squad to find out who the invaders are and to wipe them out. Kenji is the leader of that squadron, and comes across Kongou, who mutates into a monstrous beast. Although Kenji secretly distrusts his shogun and believes that he may be betraying the country, he goes along with everything while searching for more clues.

Kenji appeared as a playable character in Capcom Fighting Evolution, along with Leo, Hauzer and Hydron.

Profile text: Taught in the Oniwabanshu style and rendered loyal to the Tokugawa Shogunate, Kenji is the head of the Ramon (silk gate) family. With frank and quick-witted form techniques, he is a dangerous threat who can flash in and out of battle.

As Kenji levels up by fighting opponents in Red Earth, his title changes and grants him more abilities. His titles are as follows: 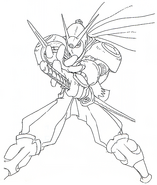 UMvC3 Heroes & Heralds card.
Add a photo to this gallery

Retrieved from "https://capcom.fandom.com/wiki/Kenji?oldid=136738"
Community content is available under CC-BY-SA unless otherwise noted.