Commander Jones sent Ken on a mission to South America to take down a huge drug syndicate, and to rescue captured comrades.

Much to his surprise, Ken Smith finds out that Commander Jones was behind the whole thing and, as a result, he ends up killing his own Commanding Officer.

Even though Smith destroyed the underground drug routes Jones was involved with, it doesn't mean he stopped the syndicate that wanted to conquer the world through drugs. He fought alone against the huge cartel even as he learned that his own Special Mission was involved with drugs. 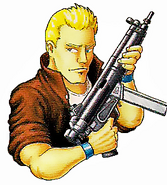 Code Name: Viper
Add a photo to this gallery
Retrieved from "https://capcom.fandom.com/wiki/Ken_Smith?oldid=103701"
Community content is available under CC-BY-SA unless otherwise noted.