Kazuya Nuri (塗 和也 Nuri Kazuya) is a video game artist at Capcom who is best known for his work on the Ace Attorney series of visual novel adventure games.

Nuri was hired into Capcom in 1999. Despite his economics background, he would take on art-related roles, starting with a sprite artist position for the 2000 PlayStation JRPG Breath of Fire IV (credited for "Character Graphics"). This was followed by the 2002 PlayStation JRPG Breath of Fire V: Dragon Quarter (credited as "Object Designer"), in which he helped with character design, 3D modeling, and animation. He is also credited as "Character Designer" on the 2005 PlayStation 2 game Haunting Ground.

Around the time Gyakuten Saiban 3 was released in Japan in 2004, Minae Matsukawa offered Nuri an illustrator position for future Ace Attorney games. He took the offer, having recently played and liked the first game in the series. Shu Takumi tested Nuri by having him draw Phoenix Wright, Maya Fey, Miles Edgeworth and Mia Fey; the resulting illustrations were used as the official art of the four characters for the Nintendo DS re-release of the first game, seen in the Japanese version's box art.

He has had a major role in several Ace Attorney titles, being the primary character designer on Rise from the Ashes and Apollo Justice: Ace Attorney, and being the art director for Professor Layton vs. Phoenix Wright: Ace Attorney and Dai Gyakuten Saiban: Naruhodō Ryūnosuke no Bōken. He also worked as an additional character designer on Ace Attorney Investigations: Miles Edgeworth, and provided the design of Apollo Justice's "Stylin' Street Clothes" DLC outfit for Phoenix Wright: Ace Attorney: Dual Destinies. Nuri's characters are designed with a sense of elegance: simple, but conveying much information. He cites Tetsuo Hara and Satoru Ozawa as influences in his art.[1] 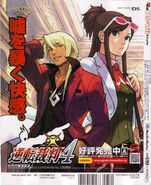 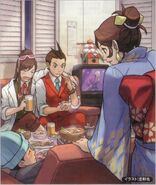 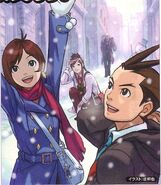 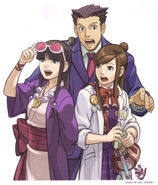 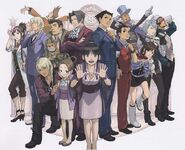 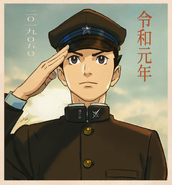 Ryūnosuke Naruhodō
Add a photo to this gallery

Retrieved from "https://capcom.fandom.com/wiki/Kazuya_Nuri?oldid=138936"
Community content is available under CC-BY-SA unless otherwise noted.