Katt is a member of the Worren tribe/clan of feline-like beings.

A sassy young competitor at the Coliseum, Katt is very much a loner. Despite that, she is shown to have great respect for Ryu. In contrast to Nina, Katt is extremely boisterous, flamboyant and cocky. In situations involving both Katt and Nina, Katt is often more brash and loud. It is possible that she may have harbored romantic feelings towards Ryu. If she is the one to go looking for Ryu in one of the endings, she becomes more rash as she tries to wake him up.

Wielding battle staves, Katt possesses great agility and attack power. She can taunt at enemies in battle and hunt animals outside of it, but loses these abilities should she fuse with Shin, a shaman. In her shamanized with Shin form (ultimate form) she gains an ability to build up a huge attack boost against one enemy by holding off for one turn. 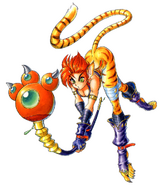 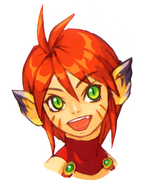 Katt's portrait from the GBA version

Katt's ultimate fusion
Add a photo to this gallery
Retrieved from "https://capcom.fandom.com/wiki/Katt?oldid=139398"
Community content is available under CC-BY-SA unless otherwise noted.