Middle class people and their ideals, people who do not fulfill their obligations, M. Bison and Shadaloo

Karin Kanzuki (神月 かりん, born September 15, 1973) is a character from Street Fighter Alpha 3. She is a rival of fellow schoolgirl Sakura and has a similar outfit, complete with sailor fuku (this one being predominantly red and white with a blue bola tie), but uses the martial art style Kanzuki-ryū kakutōjutsu, a style that she created herself, instead of Sakura's imitation of Ryu's martial art. Because of her elite upbringing, Karin has a habit of acting snobby and dismissive and thinks lower-class people are "commoners" and thus below her.

Karin Kanzuki considers herself a rival of Sakura, who defeated Karin when challenged. Karin is from a very rich Japanese family (the Kanzuki family), whose motto is "all you need is victory" and alternately "the worst we'll ever be is the best". (A bonus short in the Street Fighter III: Ryu Final manga takes this further with "Victorious, therefore Supreme! Supreme, she is Karin Kanzuki!"). The Kanzuki estate, according to Sakura Ganbaru!, stretches across 200 acres, but it is unclear how big the mansion is or how many rooms are in the mansion. The Kanzuki corporation is threatened by Shadaloo, which then makes demands of the dynasty. She used the family fortune while attempting to track down a roving Sakura, to challenge her again. Along the way, she encounters Blanka and defeats him in a friendly match, musing that "the world is so vast" for such a beast to exist. She also encounters R. Mika and battles her, and is so impressed by Mika's ability that she offers the wrestler her sponsorship. Karin eventually found and defeated Sakura, but realized the victory was a fluke, and that the fight itself is more important, not winning or losing (Ken Masters told her this previously). The two then became good friends after that. She lives by her motto more than the rest of her family, as she takes majority control of her father's company from under his nose in a hostile takeover (ironic since he was the one to drive that philosophy into her). It's unclear how close she is to her mother Nadeshiko, though. Despite being in only a small number of games, Karin is one of the most popular characters in the Street Fighter series.

Karin is a playable character in Street Fighter V, and has taken over the role her father once held as head of the Kanzuki Zaibatsu. She is shown to have matured significantly, but still retained her fire for fighting, having further polished her abilities. When Shadaloo sets Operation C.H.A.I.N.S. in motion, she organizes a group of fighters to take the battle to them. While the party splits up in search of the "Pieces" (activation keys for Shadaloo's Black Moon EMP-emitting satellites), Karin decides to take it upon herself to scout the Shadaloo base, along with Ibuki, Mika and Shibazaki. Karin and Chun-Li manage to temporarily deactivate the Black Moons, but they reboot soon after, with the Descent Program engaged, by which they are to crash into Earth rather than emit wide-area EMPs. With Abel being affected by an unusual surge of Psycho Power leaking from his body, they have no option but to retreat for the moment. Later on, as Ryu joins the group, Karin leads them all into the base for a final assault, holding out against the Shadaloo troops while Ryu, Chun-Li and Guile deal with Bison directly and Rashid stops the Black Moons for good.

Karin's butler, Ishizaki, appears in her win poses. Ishizaki is a pudgy but engaging middle-aged Japanese man with burly arms and a warm, welcoming smile. He is always willing to do what Karin wishes of him (such as tending to the opponent's injuries or serving her a cocktail drink), though sometimes he wants to get in on the action and do battle (which usually causes Karin to throw a serving tray at him). In addition, Ishizaki was assigned the job of baby-sitting/watching over Karin while she traveled the world, in search of a rematch with Sakura. Since he and her have such a close albeit rocky bond, he can be considered to be her closest friend in the Kanzuki mansion, as he is very proud of her and takes such good care of her. His name means "stone cape".

Shibazaki is the Kanzuki family's steward. While steward usually means butler, it has many other definitions, such as a person who manages another's affairs and/or finances. According to Sakura Ganbaru!, he drives her to and from school, arranges and prepares her meals (she won't eat school cafeteria food, for obvious reasons), does background research on anyone she takes interest in (even straying into the TMI territory), and other odd jobs. While concerned for her welfare, especially in regards to her interest in street fighting, he is nonetheless in awe of her abilities as a martial artist and as the heiress of the Kanzuki zaibatsu.

Later on, she brings in Shadaloo defector Birdie as a sort-of (after all, she can perfectly hold her own in a fight) muscle-for-hire, after he proves his worth to her in battle. While Birdie accepted Karin's offer under the pretense that he can get three meals a day with her, she sees something more on him. She also has an entire army of ninjas on her payroll, among them Ibuki, who had been referenced to Karin by mutual acquaintance Sakura. Rainbow Mika is also part of Karin's entourage, in her efforts to achieve greater strength, serving as the brawn to Ibuki's brains even though they usually tend to bicker with one another.

Karin's personality is basically that of the typical rich, overindulged, snobby girl. Before every fight, she laughs haughtily as if she considers her opponent inferior to her. In Sakura Ganbaru (the comic in which she and her family originate from), the rest of her high school class appear to do exactly what she tells them to do, referring to her as "Miss Karin" at all times, despite being the same age. Karin, on the other hand, refers to them as "commoners" for obvious reasons. She fights for the sake of upholding her family's motto of absolute perfection and intolerance of failure.

However, despite her arrogant behavior, she is not without redeeming qualities; after fighting against R. Mika, she offered to become her sponsor, and after defeating Sakura she admitted that she won by chance, acknowledging her rival as the better fighter, also realizing was Ken had told her earlier, that winning is not as important as the challenge itself.

Karin matures significantly in Street Fighter V, now being the standing leader of her family, and the Kanzuki Zaibatsu. However, she enjoys fights and while still being able to dish unflattering remarks, she has a renewed respect for people with skills and strength, however minimal they may be.

Udon released a four-issue mini series in 2010 called Street Fighter Legends: Sakura. Karin is a main character in the story; her personality was somewhat different than in the other media, however, as she was portrayed as thoroughly obsessed with her revenge, and even capable of resorting to dishonourable tricks to win.

Karin is a playable character in the crossover game Namco x Capcom, where she is paired with Sakura.

In all of her appearances thus far, Karin has been voiced by veteran seiyuu Miho Yamada. In Street Fighter V, she is played by Aya Endo in Japanese and Lauren Landa in English. 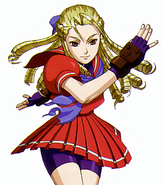 With Sakura in Namco x Capcom

With Sakura and Roll

Karin SFVCE
Add a photo to this gallery

Retrieved from "https://capcom.fandom.com/wiki/Karin?oldid=137526"
Community content is available under CC-BY-SA unless otherwise noted.