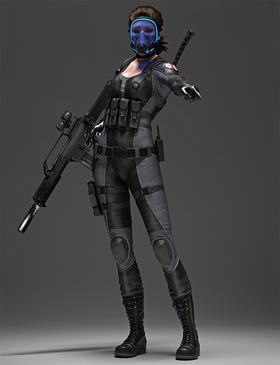 Karena LesProux is an experienced operative who retired from the French Special Forces to concentrate on building a domestic life by raising a family of her own. She eventually married, but her husband proved to be a violent man, although she tolerated his abusive nature for the sake of their children by relying on her training and discipline as a former soldier. However, she ultimately killed her spouse with her bare hands when he began abusing one of their children.

After she was acquitted of murder by a sympathetic judge, LesProux tried to raise her children as a single mother, a task she proved incapable of carrying out. Despite her efforts to assimilate into a civilian environment, LesProux's instincts as a soldier remained deeply embedded in her nature. Thus, she returned to work as a private contractor, selling her services as a mercenary to the highest bidder in order to provide for her children.

Prior to the outbreak of the T-Virus in Raccoon City in 1998, LesProux was recruited by the Umbrella Corporation to serve as the leader of the newly reconsitituted U.S.S. Delta Team, informally known as "Wolfpack." Under the codename "LUPO," or "wolf" in Italian, she serves as an expert in assault tactics and weapons use, as well as the team leader. Although she expects the same discipline and obedience from her teammates as she does her own children, her leadership style sustains an emotional bond between her and the rest of Wolfpack, leading them to affectionately dub her as their "Wolf Mother."