Kagu is a character from the Ōkami series of action adventure games. She first appears in Ōkamiden where she serves as one of Chibiterasu's partners.

A child actress who becomes one of Chibiterasu's partners on his journey. She refers to herself as "The most popular child actress in the land". Initially bad-tempered and a little self-conceited, Kagu's redeeming feature is the love she has for her parents and her strong desire to help others.

Kagu starts off as being aggressive towards others, bossing them around and expecting them to know who she is and what they should do. She is also afraid of being different, due to her Miko powers and will furiously shake any who draw attention to it (as she did with Chibiterasu and a stagehand). Kagu eventually shows a nicer side to her personality during the battle against Renjishi in the Playhouse, after Chibiterasu repeatedly took the blasts meant for her. She couldn't let it happen and started to accept herself for what she was and helped Chibiterasu with her powers.

Additionally, Kagu has a habit of flipping her hair. It is mostly seen after she addresses herself as the most popular child actress or saying something else that is a good thing of herself. Also, if Chibiterasu drops her on the ground, she will keep flipping her hair left and right.

Kagu is a young girl with dark hair, usually held up in a bun or in a ponytail (the latter is for when she accepts her Miko heritage). Her first outfit consists of a sleeveless, pink-colored kimono with yellow trimming, with a wrap around her waist kept together by a green bowed string. Her pants and feet are colored black like her hair. She wears a fancy floral headdress in her hair with strings of petal ornaments.

Kagu's second outfit, earned after defeating Renjishi in the Playhouse, resembles that of a Miko. She now wears golden bells and simple, white, rosary-like string ornaments in her hair. The sleeves and hakama of her new outfit cover her hands and feet, presumably because of her small size and it is a little big for her.

Despite her young age, Kagu is a powerful Miko, similar to Rao. Her powers give her a special sight that allow her to see spirits (like Raiden and King Fury) and perceive things that had been previously unnoticable by normal people. This "sight" is vital, as it reveals spirit floors, granting Chibiterasu access to new areas that were previously inaccessible. These floors are only seen when Kagu is on Chibiterasu's back. When she is on the ground, Chibiterasu has to rely on memory to guide Kagu pass through. She also has the ability to generate force fields made of spiritual energy that are strong enough to repel attackers and hold objects, although she can only maintain these for a short amount of time.

Like Rao, Kagu uses prayer slips during battle. These can aid Chibiterasu in battle, when fired, by homing in on the enemy and damaging them. Kagu's prayer slips play an important part in the game - they can dispel the evil seals that prevents Chibiterasu from hitting Renjishi's weak points, and as part of the story, help banish evil spirits from the buildings located around Sei'an City. However, they are not powerful enough to damage powerful spirits such as King Fury. She has a variety of them - one of the slips Kagu gives to Chibiterasu enables him and his partner to warp from the location of any Ultimate Origin Mirror.

When Kagu teams up with Chibiterasu, she displays remarkable aerobatic skills such as spinning in midair while attacking. Kagu is skillful in tessenjutsu, as she can throw fans like boomerangs. As a miko, she learnt the ways of the onmyōdō, a person with magical and occultist extents. Likewise, she knows to perform the hallowed Dance of Exorcism, a special method of exorcism known only to the incredibly gifted.

During the battle against the resurrected King Fury, Kagu demonstrates the ability to fly using her Miko powers. She also seems to be able to transform from her theatre attire to her Miko attire instantly through the use of her powers.

Apparently, Kagu can only display her full potential as a Miko when wearing the Miko Dress, since when wearing her normal attire, she never shows her ability to fly or use prayer slips. Kurow is also surprised to see Kagu able to chase him in the air while battling him.

Some time before the events of Ōkamiden, Kagu's family moved to Sei'an City and constructed the Playhouse. She also discovered her miko powers prior to [Chibiterasu]]'s arrival in Nippon.

Chibiterasu meets Kagu in Sei'an City, where she is being attacked by demons while Chibiterasu is on his quest to find Kuni, whom he had previously lost in Agata Forest. Chibiterasu steps in to save Kagu, only to be mocked by her, asking why he hesitated to help her. Her parents are both actors in the city's new Playhouse, which serves as a dungeon where Chibiterasu gains the power of Inferno from a young Moegami.

After defeating a puppet-like creation called Renjishi that is being controlled by a pair of demons named Sen and Ryo, Kagu delays her acting[1] and leaves Chibiterasu temporarily to train as a Miko at Queen Himiko's palace. Her training is cut short, however, when several residents of the city fell ill by King Fury, and attempts to help them. She is kidnapped by King Fury, however, leaving Chibiterasu and Kurow to try and save her. Later, after King Fury's defeat, she is freed from the demon's grasp.

Kagu later appears at Gen's house before Chibiterasu and Kurow depart for the past, telling them to be careful. She appears again at the climax of the story, when Chibiterasu and Ishaku are preparing to face Akuro, who had taken control of Kuni. She is the third and last of Chibiterasu's partners to join him in the end game, where they both battled the third phase of Renjishi's battle, and King Fury before being replaced by Ishaku for the final boss. During her fight against Renjishi, she wore her theater clothes and mentions her training, implying that she was taken sometime after her training was complete. During her fight against King Fury, she demonstrated the ability to fly using her Miko powers and to siphon his dark power in the way that Kurow did in the same battle. 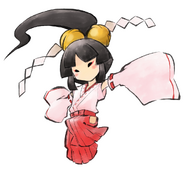 Second outfit
Add a photo to this gallery
Retrieved from "https://capcom.fandom.com/wiki/Kagu?oldid=132828"
Community content is available under CC-BY-SA unless otherwise noted.