Taekwondo(ITF)
Juri Han (韓蛛俐, 한주리, Han Juri) is one of the main characters in the Street Fighter series. She made her debut in Super Street Fighter IV.

Juri is the first Korean character in the Street Fighter series, and the only one that uses Taekwondo so far. She is described as being a somewhat mean and angry member of S.I.N from others. who is one of the main characters in the storyline. The character was created by request of many Korean fans who wished for Capcom to add a Korean character in Street Fighter, something already established by SNK and Namco. Ironically, her creation is also seen as a rib to The King of Fighters as all the Korean characters in that franchise, such as Kim Kaphwan, are representatives of justice, while she is a servant of darkness (though she once had a loving family and also has honor in a fight).

Juri was a prominent, honorable, and respected practitioner of Taekwondo when she was 15. Her father was a lawyer in charge of prosecuting organized crime operations. In this capacity, Shadaloo was his next target, causing her family to be kidnapped by that very organization. During the ordeal, Juri's parents were killed and her left eye was badly damaged and she was left for dead. Because of this incident, she became a very angry person. S.I.N. eventually fixed her eye, powering it with the Feng Shui Engine.

Juri has a very strong rivalry with Chun-Li and Cammy. Moreover, her arch foe M. Bison apparently seems to go after her most likely due to Seth's (and S.I.N.'s) attempt to stop him. Shortly after working for Seth, Juri turns on him to destroy both Bison, because of what his organization did to her and her family in the past, and Seth, for trying to rule the world and for not destroying Shadaloo. In the end, she confronts Bison, who had just beaten Seth with his power, and while the battle is not seen, she survives it. She approaches Seth, taunting him on him being a spare body for Bison before destroying him by stomping on his Tanden Engine, revealing that she planned to become the new leader of S.I.N (most likely so she could destroy Shadaloo once and for all). What happens after this is unknown.

Juri is a warrior who fights for the thrill of the battle (though the reason behind her drive is more vengeful) and also likes inflicting pain on her foes. She also has some femme fatale elements, as she sometimes makes provocative and suggestive remarks toward her opponents, and leaves those she was working with for her own reasons. Although she possesses a strong, sensual figure, she's shown to be a cunning and a somewhat reckless fighter with an angry urge to cause destruction to her arch enemies like that of Bison. She is a calculating women, callous to her arch enemies at times, and treats her allies as pawns only if it is necessary. She ignores the rules at times to achieve her own goals. Juri is a highly skilled Taekwondo practitioner and with the power of the Feng Shui Engine at her disposal, her fighting potential and positive and negative ki (similer to that of the Yin-Yang) does increase dramatically, making her a very powerful character since her debut. It is shown that she likes teasing and taunting her opponents at times before or even during battle, but also has respect for strong warriors who give her a great fight. 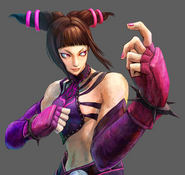 With Chun-Li and Ibuki 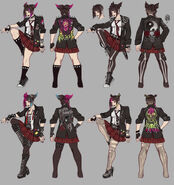 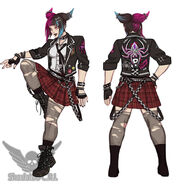