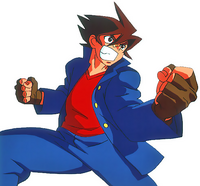 Junpei Todoroki is the main protagonist and one of the main characters of the 3D mecha fighting game Tech Romancer. His robot is Gran Armor Kaiser (G. Kaiser).

Junpei is a hot-headed hero in the series and has strong sense of justice. In his quest to defeat Goldbius, he will avenge the death of his family.

The pilot of G. Kaiser is Junpei Todoroki (voiced by Kōichi Tōchika), a hot-blooded protagonist fighter who leads the resistance against the invaders and seeks to defeat Goldibus in order to avenge his family's death. Junpei doesn't know that Shadow Red, a general in Goldibus' army, is actually his missing brainwashed father. Although he's reckless and prone to tempered outbursts when provoked, Junpei is a good person who seeks to protect those that he cares about.

G Kaiser's cameo appearance in Tatsunoko vs. Capcom.
Add a photo to this gallery
Retrieved from "https://capcom.fandom.com/wiki/Junpei_Todoroki?oldid=126642"
Community content is available under CC-BY-SA unless otherwise noted.