Junko is a character from the Viewtiful Joe series of action beat em' up games.

She was Jet's wife and an award winning actress. She received great acclaim while alive through her roles as the heroine in Blue's movies. However, her career eventually hit rock bottom, and she found it difficult to get back into the limelight. One night on the way to an audition, Junko was caught in a car crash and severely injured. Despite the hospital's best efforts, she died from her injuries.

In Double Trouble, she comes back to life for a single day and takes on the guise of Queen Heinderella, so she can see how strong her children, Joe and Jasmine have grown up to be. Upon her defeat, she reveals herself, and says goodbye to them for one last time.

Junko dying in the hospital 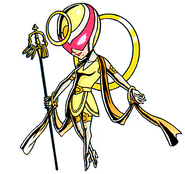