Juli (ユーリ, Yūri), whose real name is Julia, is a video game character from the Street Fighter series. She made her debut, along with her partner Juni, in Street Fighter Alpha 3 as a brainwashed female assassin belonging to M. Bison's Elite Guard, The Dolls. Her name is German for the month July, but it does not necessarily mean that she was born in Germany or in July.[1]

Juli is similar in her build to Cammy, albeit with a rather more busty figure. Her hair is styled into a bun at the back, with long, thick bangs at the front. She wears the Shadaloo Doll uniform, like Juni: a tight navy blue thong leotard with an open back, a small yellow tie attached to the front, a navy blue cap, navy blue tights, red gauntlets and black boots. On her left arm she wears a brown armband.

Julia was a young girl living in the village of the Thunderfoot tribe who was captured by Shadaloo and brainwashed to be part of the Dolls, M. Bison's assassins and bodyguards. They were completely loyal to Bison and acted and talked like robots and they were high-ranking members in Shadaloo, only lower than Bison and the other Grand Masters: Balrog, Vega and (now former member) Sagat. As Juli, she is the second oldest member of the Dolls, being often consulted for advice by the other members. She is the most rational of the Dolls, but sometimes she appears to be ruthless, possibly due to having her memory erased several times. T. Hawk, a member of the Thunderfoot tribe, vowed to find Juli.

In the arcade version of Street Fighter Alpha 3, Juli and Juni are a pair of sub-bosses whom the player face prior to the final battle against M. Bison. The player faces Juli and Juni at the same time in a two-on-one fight similar to the Dramatic Battle mode in the original Street Fighter Alpha. The two characters are unlockable in the arcade version, but they have no storyline in the actual game.

From a design perspective, the characters are actually head-swaps of Cammy (who previously appeared in Street Fighter Alpha 2 Gold and X-Men vs. Street Fighter), with the explanation given that Cammy belongs to the same unit as Juli and Juni. However, the characters have their own special and super techniques. They are the only members of Bison's Elite Guard (aside from Cammy and Decapre) to appear as playable characters in-game.

Eventually, one of the Dolls (Cammy) broke free from Bison's mind control (apparently with help from Dhalsim) and Juli was assigned to track her down and eliminate her. Cammy resisted and defeated both Juli and Juni.

After the apparent fall of Shadaloo, Seth uncovered a plan to have the Dolls assassinate him and sent Juri to the Sosna Research Facility, an old Shadaloo mountain base, to capture them instead. After all the other Dolls are defeated, only Juli and Juni are left and stand to face Juri. However Juri overwhelms them and, after knocking both unconscious, loads them onto a plane to take back to S.I.N. HQ. Cammy and Guile attempt to prevent this but are only successful in rescuing Juni; Juli is taken with the rest of the Dolls to Seth's Secret Laboratory where he plans to experiment on them until they expire.

Eventually, Juli is somehow saved. In T. Hawk's ending, Rose tells Hawk that Juli is now a shell of her former self, but that she will tell Hawk where Julia is if he insists. Following Rose's directions, Hawk finds Juli in a near-catatonic state in a cabin in the wilderness, being cared for by an elderly couple. As Hawk draws near, Julia shows no sign of recognition and continues to stare into space, (although a raindrop falls onto the window and drops beneath her eye, possibly meaning a tear).[3]

In the A Shadow Falls mode, she seems to be back with the rest of the twelve dolls as part of Bison's elite guards. She appears as an in-game NPC opponent and must be beaten by Cammy.

In UDON's Street Fighter II comics, Juli is still sought after by T. Hawk, along with Noembelu. Here, she is the daughter of a German doctor who provided care for the Thunderfoot Tribe. The doctor was found murdered, and Juli disappeared.

In Street Fighter II Turbo #12, it shows that Juli is freed of her mind control, and sets out to restore the Thunderfoot village, along with T. Hawk and Noembelu. 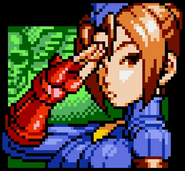 Juni and Juli and The Dolls.