Joseph "Super Joe" Gibson is one of the protagonists in Commando and the Bionic Commando series.

"Super Joe" was not the main protagonist in the NES version of Bionic Commando as he was in the arcade version. When the game was released in the U.S., the character's name was changed to Super Joe so it could be sold as a sequel to Commando. Gibson went from hero to victim, as the original Bionic Commando went from the arcades to home consoles. Instead of the one saving people, he became the one that needed to be saved in the NES version. This was accomplished by Nathan "Rad" Spencer. However in the final level in Bionic Commando, if listening to the enemy radio broadcast, it was mentioned that Super Joe was unstoppable and broke through several enemy force singlehandedly while Nathan is carrying out his mission to assassinate Master D.

He first appeared in the original Commando, although he was not mentioned by name.

As a decorated soldier in the FSA military, Joseph Gibson was known as "The Supervisor" for his leadership abilities and meticulous attention to detail. After excelling as a commando in many behind-the-lines missions, "Super Joe", as he had become to be known, left the military to pursue a career in private military contracting, teaming up with fellow former officers Howard Powell and Thomas Clarke in a team known as Mercs.

He appears in Bionic Commando: Elite Forces as Commander Joe. 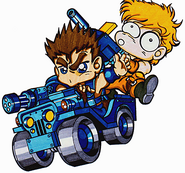 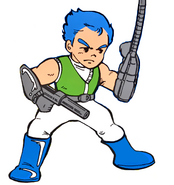