Jim worked in the Raccoon City subway. Something of a coward (like Brad Vickers), Jim has perfected the ability to "play dead," which causes enemies to ignore him (at the cost of an increased rate of infection). He is skilled at working out puzzles, and can open complicated mechanisms that other survivors cannot access.

He is a highly intelligent person who enjoys nothing more than sitting down to a crossword puzzle or some other thought-provoking challenge to pass the time, although his manner of speech and choice of clothing gives people other impressions.

Jim can be considered the "wild card" character and may even be the most advanced character to effectively utilize in the game due to the wild disparity between his positives and negatives.

Jim's unique ability is the coin flip, which does exactly what it sounds like. In game heads is always favorable. When Jim gets heads he gets a 10% critical chance upgrade, an effect that stacks up to three times. When he gets tails the counter resets to 0 regardless of how many times he has gotten heads. For example if Jim gets 2 heads and is at 20% extra critical and he gets one tails his 20% will go down to 0 not 10%. For this reason it is recommended if Jim gets 3 heads in a row to not use his coin flip ability in the game.

Jim's unique action is to play dead. Jim literally throws himself to the ground face down and pretends he is dead and most enemies will leave him alone and go for his allies. The use of this ability is questionable as it increases his infection rate to about what the crawl state when a character can't stand on their own causes. While a few times might not be costly of usage one of the three female characters can be used if an avoidance technique is required. Yoko has far less health but her own ability allows her to create distance between the enemy and herself. Cindy's has fast activation but less health and Alyssa's is a little more complicated to use but Alyssa does not depend on a situational ability to get more damage to compensate. All three of the female's ability do not have a "cost" either.

In File 2 Jim acquired a new unique ability arguably more useful. Jim is shown all items, including hidden ones, that others would have to manually find. This is very useful for getting some of the hardest alternate outfits to acquire in the game such as Cindy's bikini outfit.

Jim has 1800 health which is more than the delicate "frail" females Cindy and Yoko but less than Alissa at 2000 and every other male character. Jim's infection rate is dangerously high and he has just over 1 hour of playtime, so anti infection pills are very beneficial to him. His unique ability decreases his total playtime significantly thus other characters (who are admirably worse handing in some situations) might be more useful if a defensive or utility playstyle is desired.

However Jim works very well in a coordinated online team. It might be a chore to reach his 30% (his critical stacks on with the base critical of all characters get by default) but when he does he can be the main damage dealer of his team. He can be considered only second of importance only to Yoko (due to her backpack) in getting the best ending in the game due to him getting more bang per buck on ammo without having to take extra time like Mark and Alyssa and is generally considered the best contender when fully automatic weapons are available.

However in offline game modes his advantages are less important. In outbreak in most missions one ally tends to stick with the player and the other tends to go on their own. However the ally who doesn't break away doesn't solve puzzles so the player has to hold the items required meaning having a weapon and ammo is generally out of the question. When offline Cindy might be a desired following ally as she will hold and pick up healing items that could help Jim players when frontlining. To this end Jim is a horrible canidate for "Lone Wolf Mode" as his advantages are even harder to take advantage of when he has no allies to help him hold items. 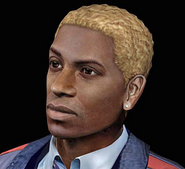 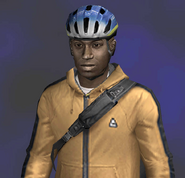 "Bike Messenger" Alternate Outfit
Add a photo to this gallery
Retrieved from "https://capcom.fandom.com/wiki/Jim_Chapman?oldid=137821"
Community content is available under CC-BY-SA unless otherwise noted.