This article is about the Resident Evil character. For other characters with the same name, see here.

Jessica Sherawat is a character from the Resident Evil series of survival horror games. Her first and only appearance so far was in Resident Evil Revelations.

Jessica Sherawat was a former member of the Federal Bioterrorism Commission who later became a member of the Bioterrorism Security Assessment Alliance (BSAA). She goes together with Chris as partners in a bioterrorism investigation. In the end, it is revealed that she was secretly a spy, working as a double agent for TRICELL, the multi-industrial company that was involved deeply with the Plaga outbreak during Resident Evil 5.

Jessica seems to have a 'devil may care' attitude toward her missions. She is not adverse to the odd complaint or even light-hearted joke, but her extroverted nature can often cause friction and disruption within the BSAA. Often allowing her personal feelings to be known, Jessica is not shy when it comes to confessing her true desires. Her partnership with Parker stems from their survival of Terragrigia and she often has light hearted banter with him, often claiming he owes her a lobster dinner. Indeed, it is suggested that she enjoys the finer things in life and could be somewhat materialistic.

Jessica chitchats a lot while on mission and also did it while working with Chris. Jessica's romantic interest in Chris seems one-sided, with Chris maintaining a professional relationship with her. In "Jessica's Report", she thinks highly of Chris, considering him a hero. She doesn’t appear to like Jill Valentine, thinking Jill as a prudery and boring person. Outside of personal view, Jessica still thinks that Jill have excellent skills.

She also seems oblivious to Quint's crush on her. Her partnership with Raymond is elusive, although both agents played their parts so well that they managed to survive the FBC and recover the T-Abyss sample for Tricell.

In 2004, Jessica was a part of the FBC, partnered with Parker Luciani during the biological attack to the floating city of Terragrigia. The two worked together to rescue a wounded Raymond Vester, and after fighting through waves of Veltro controlled Hunters the two escaped the doomed city via helicopter shortly before their commander, Director General Morgan Lansdale, ordered Terragrigia's destruction at the hands of the Regia Solis satellite.

After the incident, both she and Parker joined the BSAA.

In 2005, she worked alongside Chris Redfield as the two investigated reports on the return of Il Veltro. Sent to investigate the remote Valkoinen Mökki Airport, they were contacted mid-mission by Clive R. O'Brian, who informed them that Jill Valentine and Parker had gone missing in the Mediterranean Sea on the Queen Zenobia, which was also supposedly controlled by Veltro. Due to miscommunications, they ended up on the Queen Semiramis. Finally reaching the Queen Zenobia, they met up with Jill and Parker.

At that moment, a masked figure believed to be Veltro leader Jack Norman appeared, threatening to reveal the secret of Lansdale's labs on board the ships. Jessica, who had been a double agent acting as a mole for Lansdale, took the initiative and shot the masked man. This man was later revealed to be a disguised Raymond Vester, who was working under the orders of Director O'Brian to attempt to expose Lansdale's illicit operations. Vester then supposedly died from his wounds.

Agreeing to split into their old partnerships, Chris and Jill investigated the ship's labs while Parker and Jessica headed elsewhere. She then told Parker to go to the bridge while she headed below to stop the sinking. In reality, she took a more direct route to the bridge in an attempt to activate the ship's self-destruct mechanism to destroy the labs and protect Lansdale. When she was caught in the act by Parker and an unharmed Raymond before she could, she revealed to them both that she was the mole in the BSAA, and tried to shoot Raymond again, but Parker took the bullet instead. She succeeded in activating the self-destruct mechanism and left, with Raymond in pursuit.

Though Raymond said that Jessica escaped, actually the two had been working in collusion the entire time as triple agents employed by TRICELL. She met Raymond in a European cafe, where Raymond provided her with a sample of the t-Abyss virus. When Jessica asked why Raymond rescued Parker, he merely replied that he had his reasons. The two went their separate ways, and their current locations are unknown.

Jessica acts as only a partner character during some campaign episodes of Resident Evil Revelations, but she is a full playable character in the game's action-oriented minigame, Raid Mode. Her melee attack involves her raising her right leg straight up while charging, then dropping it straight down for the attack. In all her costumes, Jessica uses the basic knife swing attack. Her winter and vintage costumes use the Survival Knife while her Diver costume uses the Diver Knife. 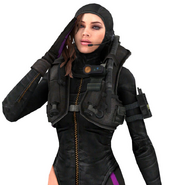 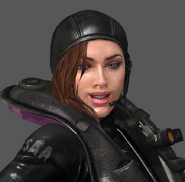 Up-close of Jessica.
Add a photo to this gallery
Retrieved from "https://capcom.fandom.com/wiki/Jessica_Sherawat?oldid=140006"
Community content is available under CC-BY-SA unless otherwise noted.