This article is about the Dead Rising character. For other characters with the same name, see here.

Jessica McCarney is a character from the Dead Rising series of survival horror games. She is a supporting character who only appears in the first game.

Jessica is Brad Garrison's rookie partner. She is charged with watching the monitors for information on the person/people responsible for the outbreak. Like Brad, she is distrustful of Frank West, and patronizes him for being a civilian. However, she grows to trust Frank after he manages to retrieve the medicine from the food mart manager. Jessica would later be bitten by an infected Dr. Barnaby and becomes a zombie by the final hours of the game. She kills two Special Forces soldiers in her zombie form, and is found by Frank wandering the security room.

Jessica, along with Brad, made a cameo appearance in Frank's ending in Tatsunoko vs. Capcom.

She is playable in the iOS version of Dead Rising. 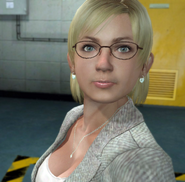 Jessica's cameo appearance in Frank's Tatsunoko vs. Capcom ending.
Add a photo to this gallery
Retrieved from "https://capcom.fandom.com/wiki/Jessica_McCarney?oldid=132823"
Community content is available under CC-BY-SA unless otherwise noted.