Jedah Dohma was a major villain from Darkstalkers. He is a dark messiah with some traits borrowed from the Grim Reaper. He has an unique appearance of a thick body suit that shows his muscular body. His hair is not shown completely, hidden by a headdress that has a bat-like appearance and he has long and retractable finger nails as well as wings that have a metallic appearance. All of Jedah's moves are unusually gory, using his blood to attack enemies.

Though he is over 6000 years old, Jedah is the youngest out of the three High Nobles of Makai.

Jedah was always distressed about the future of Makai (Japanese for "demon world"). He believed that if Makai was left under Belial's rule, the master of the Aensland family and the true ruler of Makai, then it would grow old and begin to decay. Belial would most likely say that such is destiny and life. Jedah considered Belial to be an abomination, and actively sought out the opportunity to kill him, waiting for the right time to strike.

After the death of Garunan, the master of the Bosital family and the oldest of the three high nobles, Jedah had a young confidant named Ozom. Simply put, he was a gourmet. The reason he came under Jedah was to be able to eat delicious souls. As a noble, his skills were second class, but his ability to deceive others were first class. He was a genius in using others. He advised Jedah about using the gate of Makai. Jedah, being confident in his ability to absorb souls, agreed to this. He ordered Ozom to break a part of the seal to open the gate more.

When Ozom arrived at the gates, he realized that enormous powers lay within the gates and that even Jedah would destroy himself if he absorbed all this power at once and saw this as his chance to take over the throne. He lies to Jedah and tells him that he must destroy all the seals because little power was coming out. After destroying the seals, he ran off to the far reaches of Makai. The destruction of Jedah meant his rise in power and his plot succeeded.

Ozom gathered the left over power and stored it in Dohma Castle. This is how Ozom became the new master of the Dohma family; the birth of Emperor Ozom.

100 years later, after a century-long sleep, Jedah was revived in Makai. He felt distressed towards the crazed Makai, nobles fighting each other and spilling blood. Instead of anger, he felt pity towards Ozom, who had betrayed him. Jedah had already made up his mind: all souls now had to be completely cleansed. For this, a new dimension was necessary: Majigen.

Jedah arrived at Dohma Castle and saw Ozom and laid out his hand. Although his powers were not yet completely restored yet, he had enough powers to remove Ozom. Now that Ozom had been reduced to a spineless jellyfish, Jedah quietly whispers, "Ozom... I am sorry, but please lend me your powers. Your soul would become the foundation of Majigen and will help the future of Makai."

The Dohma Castle was taken into the dark space along with the now-soulless Ozom. This was the beginning of Ozom's salvation. Jedah believed that he was the one that needed to recreate life by fusing all souls into one life form, the Shintai. To do this, he summoned all those with worthy souls to enter into his newly created realm.

Ultimately, his plans did not come to fruition and he was killed by Morrigan during the events of Darkstalkers 3, after Lilith returned to her body. Despite this, due to his ability to revive after a period of time, the threat of Jedah does not end with his death.

Jedah is very cool, collected and confident. He has a degree of arrogance, but as a whole, he is focused and patient, all for achieving his goal of saving Makai from a destiny seen by Belial. It is rare to see Jedah express emotion, except in fits of insanity. But even these are subdued by his own calm attitude eventually.

Being an S-Class Darkstalker, Jedah is one of the strongest beings in the Darkstalkers universe. His very blood is dangerous and can even hurt enemies and he especially likes to splash it in large waves. Splashes of his blood can reform into jagged blades, and his trademark attack, consist of a floating, rotating bloody blade. In addition, he can pump his enemies full of blood until they explode from the inside out and summon large demonic hands. He can even decapitate himself or mutilate any of his body parts without suffering any ill-effects and can regenerate his body parts from these wounds. He is fond of contorting his wings into weapons, such as forming them into spinning blades and scythes or use them as shields. He doesn't really use punches or kicks, instead relying on his wings and claws. He can extend his arms and his claws towards his foes to pierce them. He is able to absorb the souls of others from which he can instantly increase his own powers. He is capable of passing through dimensions and he can sense the energies of other beings on a cosmic scale.

Jedah appears for the first time as a playable character in Marvel vs. Capcom: Infinite as a major antagonist. In the game's story mode, he is amongst the villains who have willingly aligned with Ultron Sigma (a fusion between Avengers' Ultron and Mega Man X's Sigma), with the goal of assimilating as many millions of souls as possible into a giant Klyntar symbiote. Though a staggering task, his ability to control souls is bolstered through the use of the Soul Stone he has in his possession. To that end, he partners with M.O.D.O.K. of A.I.M.Brella (a merger between A.I.M. and Umbrella), who holds open the portal to the Dark Kingdom (a fusion between his home series' Makai Kingdom and the Dark Dimension) using the Mind Stone he has in his possession, which would allow the Symbiote to run free once completed. Jedah also finds himself an ally in Dormammu, the ruler of the Dark Dimension, and Firebrand due to the merger of their respective realms.

Jedah in this game was somewhat censored to fit into this crossover series. His blood was changed from it's normal red to purple in order to slightly mask the apparent levels of gore he enacts with some of his attacks. Some of his moves were also changed to tone down the violence, however his overall gameplay and visuals remains for the most part untouched from his appearance in his home series. 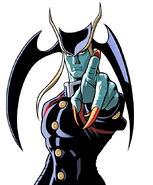 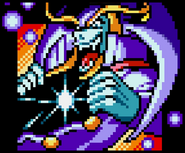 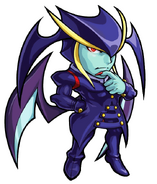