Jake Muller is a character from the Resident Evil series of survival horror games. He makes his debut in Resident Evil 6 as one of the main characters.

Jake is the biological son of series villain Albert Wesker. He is a mercenary who is working in order to secure funds to support his mother. Operating within an anti-government guerilla group in the Eastern European republic of Edonia, Jake has found himself unknowingly caught up in an act of bioterrorism.

Jake's mercenary group were supplied with nutritional supplements that were actually augmented with the C-Virus, though for some reason Jake was not affected by the virus and instead of mutating was simply unaffected. Jake's blood is something that many companies have shown interest in due to his alleged immunity to the C-Virus, as many see it as a cure for the epidemic while others see it as something that may need to be contained and exploited to turn a profit. Indicative of his mercenary personality - Jake is willing to hand over his blood, but only to the highest bidder.

His partner throughout the game is Sherry Birkin.

As a professional mercenary, Jake was thoroughly trained extensively armed and unarmed combat and in the use improvised weapons such as explosives, sniper rifles, automatic weapons and bladed weapons. It is possible that he has some experience in handling small motorized vehicles such as motorcycles/dirt-bikes and snowmobiles or is a very quick-learner, as he drives both in very high-tension and quick-paced situations.

Jake evidently is skilled in hand-to-hand combat, being able to string together powerful attacks quickly even among multiple targets. Strangely, a number of Jake's favored attacks such as upward palm thrust and downward piercing kick are identical to those used previously by his father. His hand-to-hand combat attacks are very powerful, seeming to decimate enemies quickly and even staggering the Ustanak - something only done so far by high-caliber weapons like the Elephant Killer or large explosions, whereas normal gunfire does nothing to stop it or slow it down.

His swiftness in hand-to-hand fighting has shown to be greater and stronger than Chris' and Leon's, as he quickly defeats J'avo with perfectly-fitted combos in RE6. While Chris and Leon use more conservative and simpler fighting style, Jake often incorporates flashy jump kicks and classic wrestling throws without getting worn out due to his increased stamina.

More so, Jake also has a talent in playing the piano. Jake also seems to have an ability to learn foreign languages by only listening. Jake was able to learn Cantonese from his captures just two months into his captivity. By six months, the time he and Sherry escaped, he was able to read and speak it fluently. 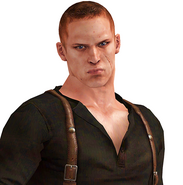