Jacques Blanc (ジャック・ブラン, Jakku Buran) is a character from the Onimusha series of action adventure games. He is one of the two main protagonists in Onimusha 3: Demon Siege. He is the first Westerner to wield the Oni Power.

Jacques Blanc was born and raised in Paris, and is a member of the General Directorate for External Security under the 29th SA Operations Division of the French Military, an elite squad whose specialty is covert operations. Jacques' favorite weapons are his FN P90 custom submachine gun and his .45 automatic pistol. He is also an avid lover of motorcycles, and owns one as well.

Jacques is extremely intelligent and is also a top athlete. He is currently one of the unit's top members. Along with Jacques, his best friend Phillipe is also a member, along with First Lieutenant Michelle Aubert. He is also a widower with a ten-year-old son named Henri. His wife died in a car accident, while protecting their son. As a result, Jacques and Henri share a bond strong enough for Henri to realise when his father is in trouble (which is useful in the game). However, Henri doesn't like the fact that he is dating Michelle, and isn't afraid to show it.

While Jacques attempts to sort out the intricacies of his personal life, demons suddenly appear in downtown Paris and begin slaughtering innocent civilians. Rushing to the scene, Jacques encounters the displaced samurai, Samanosuke Akechi. Before the two can overcome the language barrier, Jacques is caught in a time rift and transported to Japan in the year 1580, during the height of Oda's regime. In the forest he encounters an Oni chieftain, who grants him an Oni Gauntlet like Samanosuke's and charges him with the task of defeating the Genma and their lord, Nobunaga. The only way Jacques can return to his own time and make sure Michelle and Henri are safe is by carrying out the wishes of the Oni. 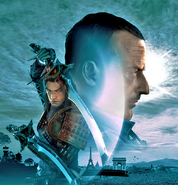 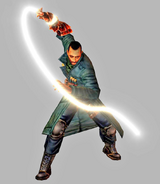 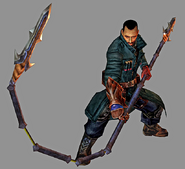