Jack is a playable character in the Power Stone fighting games.

His age is unknown, it is rumored that he could be around 40 years old. In the Power Stone anime, it is mentioned he is over 100 years old.

He weighs 112 pounds, measures 6'3" and has an original fighting style. He and Ryoma are the only two characters in the original Power Stone who wield a weapon. Jack is from the town of Manches (reference to Manchester). When in Power Change, he is known as the Mad Clown. In this mode, he is either green or blue. In the anime, he is purple.

Jack makes no distinction between good and bad. His pleasures are simple; he likes anything shiny, and loves to cut with his knife. In Manches, his hometown, he used to rob strangers of their jewelry. One day, he overheard a tale about Power Stones, the most glittering jewels of them all. His new hunt has only just begun.

In his ending, Jack finds the Power Stone that he has been searching for. He uses its magical properties to grant himself a wish; a double. His twin is then jailed for his crimes. A pair of women are seen talking about the newspaper detailing the infamous Jack's arrest as they walk down a dark alley. Jack laughs, as he starts his way down the alley after the two unsuspecting ladies.

Jack's wish increases after obtaining the Power Stone. As if in response to his desire, he hears a strange voice one night. "A mysterious castle will emerge at the next full moon. It is filled with shiny treasures."

Jack is happily absorbed into the floating castle without knowing it's an invitation from the dark.

Jack's moves are surprisingly agile, mysterious and unpredictable, though his attack power is relativey weak. The best technique is rapid attacks, disturbing the enemy's rhythm, which will wear the enemy down over time. Unlike all the other Power Stone characters, Jack crawls, so he can avoid many attacks. Jack's Killer Dance is hard to dodge, but can be avoided, giving the opponent a chance to attack him. In Power Stone Collection, he unlocks the Manches Chainsaw.

In the anime, his full name is "Jack Winslow", the last surviving member of the Winslow family for over 100 years.

Jack is chasing after Edward Falcon's Power Stone, calling it his "lovely". Jack makes his initial appearance at an opera house where he jumps down from above the stage and steals the jeweled necklace off the unsuspecting opera singer. Falcon gives chase when Jack tries to escape the scene and follows Jack all the way back to his “Ghost Ship”.

It is revealed in a later episode when Jack makes an appearance on the same cruise ship as Falcon and company that Jack is likely to be the presumed deceased son of the noble Winslow family of Sunland, although in that case, because he hadn’t died in the ship fire that killed his mother, Jack would be over 100 years old. Jack Winslow's mother once wore a jeweled necklace with a stone that resembles Falcon's Power Stone which is why Jack is desperate to claim it. After hearing this story and interacting with him further, Falcon begins to sympathize with Jack and tries to help him, but circumstances don’t allow it.

Toward the end of the series, Falcon lets Jack gets away with his Power Stone, but Jack returns with it to help Falcon in the final battle, and he is officially accepted into the Power Stone gang as a friend. He almost ends up sacrificing his life when he shielded Falcon from an attack against Valgas.

After the ordeal and everyone returns to their homes and lives, Jack remains in Dark Land where he chooses to live with the animals. 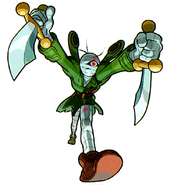 Jack in the anime

Jack on the beach with some other Power Stone characters and Dino Crisis' Regina.
Community content is available under CC-BY-SA unless otherwise noted.
Advertisement