Ivy are bipedal green plants with arm-like vines and a large orange flower for a 'head'. Their main method of attack is to whip their target with their vines. They can also attack at range by spitting acid. If players get too close, the plant will grab them with their vines and spit acid over their bodies. In some cases, the monster may appear to be dead, but will still whip players who walk too closely.

Should the player choose to release a gas called P-Epsilon into the lab, Ivies are enhanced and become Poison Ivies. While the gas weakens other B.O.W.s and was designed to help suppress escaped subjects, it strengthens these plant monsters. Poison Ivies have slightly different coloration than their counterparts and are physically tougher. The most notable difference is that the acid they spit is now poisonous.

A tropical variant of Plant 43 was encountered by Leon S. Kennedy and Jack Krauser in South America in Resident Evil: The Darkside Chronicles.

Ivy + YX possessed a slightly more human lower body and, perhaps consequently, was somewhat faster moving. Its head shared a close resemblance to tropical flowers such as the venus flytrap, with three long, narrow 'jaws' that flare out wider at the tip. The Ivy + YX was also stronger and tougher than its original counterpart. 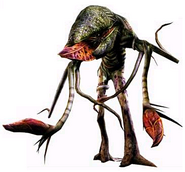 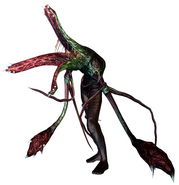 Ivy + YX
Add a photo to this gallery
Retrieved from "https://capcom.fandom.com/wiki/Ivy?oldid=106177"
Community content is available under CC-BY-SA unless otherwise noted.