Ivan are characters and enemies from the Resident Evil series. It is the name of two bosses from Resident Evil: The Umbrella Chronicles.

The T-103 Ivan, a specially re-engineered derivation of the T-103 Tyrant line, was created by Sergei Vladimir to serve as his personal bodyguard. Its basic combat functionality is that of a T-103, but it has been modified to better assimilate into human society. In addition to the trademark T-103 defensive coat, this model is also equipped with colored visors that include a head-mounted display. Major improvements with this model include greater powers of comprehension, and the ability to pass as a human. It is still a T-103 and, as such, can transform into a Super Tyrant when the situation calls for it.

Only two Ivans were made. Both were created to serve Sergei. The only difference between them is the color of their visors: one blue and the other orange. Albert Wesker first fought one Ivan in 1998. In 2003, he fought both Ivans at the same time, knocking them both unconscious in the process. Their fate after the fight remains unknown. 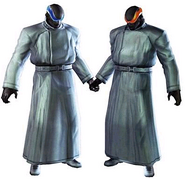