Itsuki leads a rebel group for the sake of her fellow villagers suffering due to war. She has a special taskforce wearing pink vests in Sengoku BASARA 2. In Devil Kings, she is twelve years old and speaks with a U.S. Southern accent. Itsuki wields a giant hammer and her element is ice.

Itsuki's village is frequently scoured by samurai collecting taxes or in need of provisions, and all villagers suffer because of them. When Itsuki's village is raided by samurai for the umpteenth time, the Goddess of the Rice Fields Ukanome speaks to Itsuki, recognizing her love for rice, and grants her a magical weapon that literally falls out of the sky: a giant wooden hammer. With this new divine support, and the cooperation of her fellow villagers, Itsuki sets out on a journey for revenge against all "bad samurais".

Unlike most playable characters in the series who are based on historical people, Itsuki is a fictional character representing the Ainu tribe from Hokkaidō. 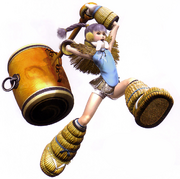 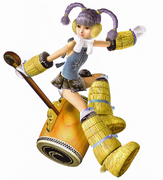 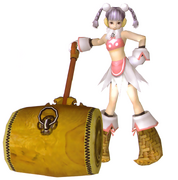 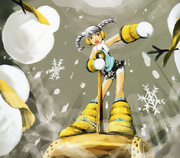 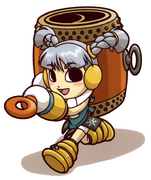 5TH ANNIVERSARY HEROES artbook
Add a photo to this gallery
Retrieved from "https://capcom.fandom.com/wiki/Itsuki?oldid=141328"
Community content is available under CC-BY-SA unless otherwise noted.