Iris is a supporting character from the Mega Man X series. She first appeared in Mega Man X4.

She was developed by Repliforce scientists as half of the perfect fighting Reploid. Colonel, her brother, was the other half. Her half was of the peaceful arbitrator, and Colonel's was of the strong-willed fighter. Repliforce scientists had struggled to make these two factors into one Reploid (similar to X), but the differences were irreconcilable, so they split them into brother and sister Reploids.

Iris trained with the Maverick Hunters, and during this time she developed feelings for Zero. Later, Zero saved her during the Sky Lagoon incident, and she acted as a spotter at Maverick Hunter Base and instructed Zero on where to go for his missions. Despite her willingness to instruct Zero, she constantly urged him to withhold his fighting, especially from her brother. When they faced off, she stopped the fight before anyone could get hurt. But to her dismay, Zero was only spurred on further to stop the Repliforce.

When her brother was killed later at the hands of Zero, the pain drove Iris mad and she made a trip to the Final Weapon where she used Colonel's fighting will to gain powerful body armor. She waited for Zero in a laboratory ready to avenge her brother. Like the Repliforce scientists had discovered, her system wouldn't accept the fighting spirit and frequently rejected it as she fought, causing her horrible pain. Zero defeated her, but rushed to her side instantly after; it was too late however, as Iris was already dying. It was at this point that she admitted point-blank that she had feelings for Zero, admitting that the utopia was a myth, but claiming she wanted to be there with him.

Iris makes a small cameo in Mega Man X5, when using Zero to destroy Sigma's latest incarnation. Zero remembers her while reflecting on his life, as he himself perishes due to most of his body being destroyed.

She also appeared as X's and Zero's guide in Mega Man Xtreme 2 for the Game Boy Color, which does follow the X series characters. This takes place before the events of Mega Man X4.

An alternate universe version of her appears in the last installment of the Battle Network series, MegaMan Battle Network 6, and plays a significant role in the storyline. 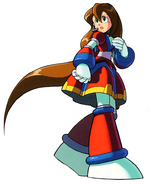 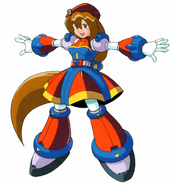 Cameo in Mega Man X5
Add a photo to this gallery

Retrieved from "https://capcom.fandom.com/wiki/Iris?oldid=132819"
Community content is available under CC-BY-SA unless otherwise noted.